The Bad Batch
A Youtini Collection

This is some text inside of a div block.
The Bad Batch

"We’re more deviant than we are defective."

hey may not fit in among the clones, but the Bad Batch certainly fits in with these great Star Wars stories. The newest project on Disney Plus courtesy of Executive Producer Dave Filoni and Lucasfilm Animation has started off with a bang! It also sent fans of the Expanded Universe into a frenzy right out of the gate, comparing the opening sequence to a certain series of events in Kanan: The Last Padawan. As you wait between weeks for more adventures of Hunter, Echo, Wrecker, Tech, Omega, and Crosshair, there’s plenty to dive into in the larger world of Star Wars storytelling.

First, the animated projects that proceeded it. Bad Batch follows hot on the heels of the revival of the Clone Wars as Season Seven hit the small screen in 2020. The Bad Batch, interestingly enough, was first introduced as an unfinished animatics reel released to StarWars.com in 2014 as part of the Clone Wars Legacy project. This rough, early version of the story arc was important enough to Filoni and company to release to the world in its as-is condition—clearly he had bigger plans for the ragtag crew. Their mission is to retrieve the Republic battle algorithm from behind enemy lines in Separatist territory—which leads them to discover that Echo, a former squad-mate of Rex and Cody, has been captured and programmed for nefarious purposes. Echo’s story is first told in Season 1 episode 5, Season 3 episodes 1 and 17-19, then continues into what eventually became episodes 1-4 of Clone Wars Season 7. They were truly some of the most visually compelling episodes of the beloved series, taking the action, animation, and voice acting from Dee Bradley Baker to entirely new levels. With the arrival of The Bad Batch, these episodes have tremendous rewatch value as Echo’s story has gone to all-new depths.

From there, we’d like to recommend a handful of carefully curated books and comics for your enjoyment—both Canon and Legends. First and foremost among the volumes you’ll want to check out after watching the pilot is 2015’s Kanan: The Last Padawan. It overlaps curiously with the first scene of Bad Batch, though differs in the details. . . We’ll let you explore the source material on your own without spoiling too much of it here. BUT we believe both Bad Batch and The Last Padawan are excellent stories in their own right and this all comes down to seeing things “from a certain point of view.”

Beyond Kanan and Canon, you’ll need to look in Legends. The Bad Batch isn’t the first overpowered crew of clones to get caught in the crosshairs of Order 66. Controversial and compelling, Karen Traviss’s Republic Commando series follows Delta Squad through the Clone Wars and even continues their journey into Imperial Commando: 501st. Consisting of Hard Contact, Triple Zero, True Colors, Order 66, and 501st, these character-driven books set in the early years of Clone Wars storytelling were eventually overwritten by the animated series and serve as an interesting case study in comparison.

Furthermore, the Coruscant Nights trilogy of novels and the Dark Times comics from the mid-late 2000s give a glimpse into the Legends rendition of the aftermath of Order 66. Both are among the most underrated diamonds-in-the-rough of the Expanded Universe and will not disappoint. If the dark and gritty world of the Empire’s infancy is your vibe, these are the books for you.

Looking for more Bad Batch content? Tune into Bounty Hunt, our weekly livestream recap show each and every weekend on youtube.com/youtini. In the meantime, check out our episode recaps for the pilot, “Aftermath,” “Cut and Run.” and “The Replacements.

The Youtini Collections team has hand-selected the books in this collection
No items found. 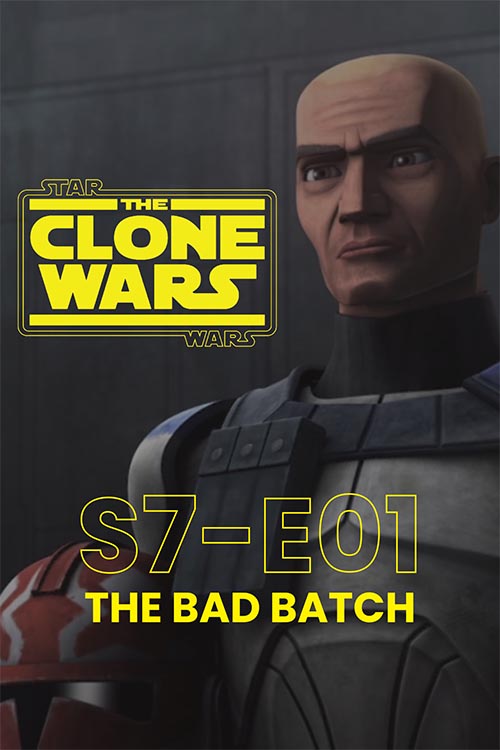 Written by
Artwork by
Part of the
The Clone Wars (TV Show)
#
in the Youtini Reading Order
After repeated setbacks on the planet Anaxes, an elite clone squad is deployed to investigate the Separatists’ tactical advantage. This special unit called “the Bad Batch” infiltrates Admiral Trench’s cyber center to steal a strategic algorithm capable of predicting the Republic’s every move. What our heroes found was a live signal from the Arc Trooper known as Echo, a clone long believed to be dead. . .
Rex, Cody, and Clone Force 99 (an unorthodox, elite squad also known as the Bad Batch), look to recover the Republic's strategy algorithm from Admiral Trench, but a haunting truth awaits.
Masterpiece
Incredible
Good
Fair
Mediocre
#
in the Youtini Reading Order 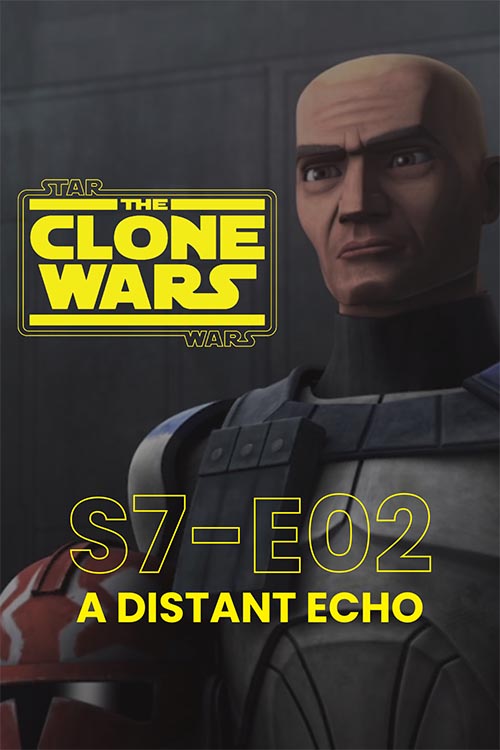 Written by
Artwork by
Part of the
The Clone Wars (TV Show)
#
in the Youtini Reading Order
On an unsanctioned mission to rescue the ARC Trooper Echo, General Skywalker, Captain Rex, and the Bad Batch travel travel to Skako Minor, headquarters of the Techno Union. After a harrowing encounter with the natives, our heroes infiltrate the city of Purkoll, only to find themselves surrounded by Wat Tambor’s forces.
Believing that MIA soldier Echo may still be alive, Rex's mission becomes doubly important. Alongside Bad Batch and Anakin Skywalker, the clone captain launches a dangerous covert rescue.
Masterpiece
Incredible
Good
Fair
Mediocre
#
in the Youtini Reading Order 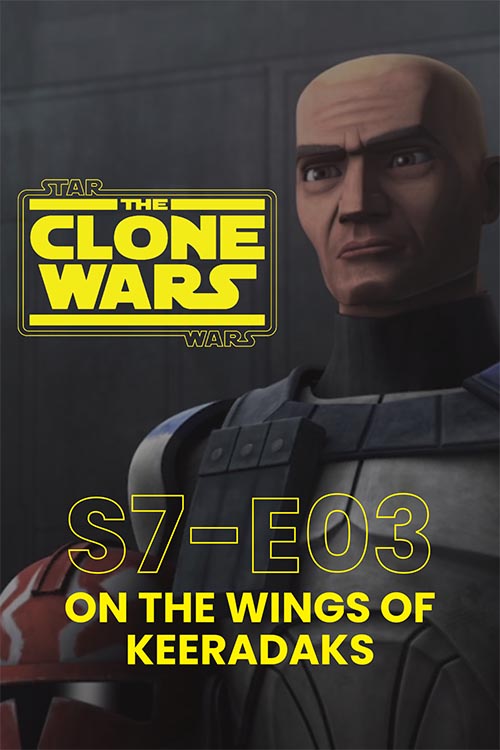 The Clone Wars S07E03: On The Wings Of Keeradaks

Written by
Artwork by
Part of the
The Clone Wars (TV Show)
#
in the Youtini Reading Order
With the help of the Bad Batch, Captain Rex rescues his old friend, ARC Trooper Echo, from the Techno Union. The Separatists’ loss of Echo’s strategic algorithm provides a chance for the Republic to turn the tide in the battle for Anaxes. However, Echo’s horrifying experience behind enemy lines leaves lingering questions of his true loyalty and uncertain future.
With Echo recovered, Rex, Bad Batch and Anakin Skywalker look to fight their way out of a Separatist base.
Masterpiece
Incredible
Good
Fair
Mediocre
#
in the Youtini Reading Order 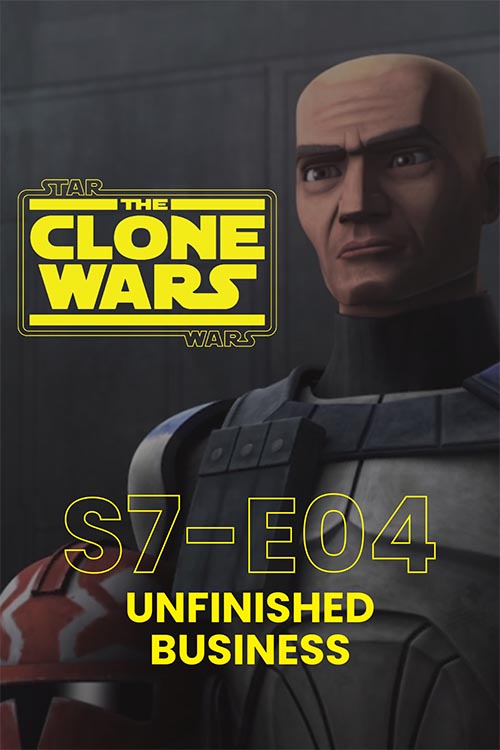 Written by
Artwork by
Part of the
The Clone Wars (TV Show)
#
in the Youtini Reading Order
ARC Trooper Echo has a plan to save Anaxes: infiltrate the Separaitst base, feed misinformation to Admiral Trench, and give secret intel to the Republic. The mission is a true test of Echo’s loyalties and of his comrades’ trust. Even with Anakin Skywalker, Obi-Wan Kenobi, Mace Windu, Captain Rex, and the Bad Batch, outsmarting Admiral Trench is far from easy. The Bad Batch arc of Clone Wars Season Seven concludes in truly explosive fashion!
The Republic plans a daring final strike against Admiral Trench, once again bringing together Rex, Echo, Anakin Skywalker, and the elite Bad Batch squad.
Masterpiece
Incredible
Good
Fair
Mediocre
#
in the Youtini Reading Order