"Don't you call me a mindless philosopher you overweight glob of grease!"

Who would have thought that a foul-mouthed and mischievous astromech and a prim and proper translator droid would be the best of friends? Yeah, R2 and C-3P0 may squabble but they always have each other's backs. While they may not be on the front lines, they were instrumental in pulling off the most seemingly impossible assignments. Not to mention providing some of the best comic relief.

They have appeared in all 9 Saga films as well as Rogue One, Rebels, The Clone Wars, and we cant forget all of the novels and comics! Speaking of novels and comics, this list contains a handful of the dynamic duo's best appearances in the extended universe. 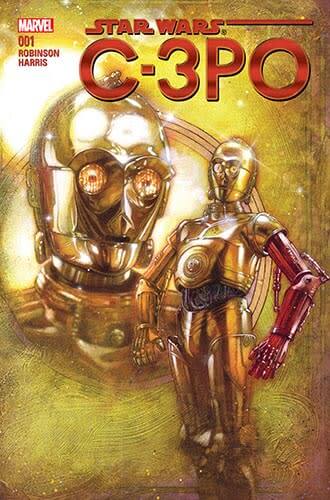 Written by
James Robinson
Artwork by
Tony Harris, Tony Harris
Part of the
Journey to Star Wars: The Force Awakens Series
Stranded on a violent planet with a group of other random droids, we finally learn how C-3PO came to have his red arm in The Force Awakens. While this might not be quite as action fueled as some other one-off comics, the plot is surprisingly deep. It discusses the idea of whether droids can form emotional connections and if they need their memories to be who they are, also bringing up how 3PO had his memories wiped at one point in time.

Follow everyone's favorite protocol droid as he Journeys to Star Wars: The Force Awakens, in this special one-shot leading up to his appearance in the film! Just how did Threepio get a red arm, anyway? Find out here as the blockbuster creative team of James Robinson and Tony Harris of DC's Starman reunite for the first time in nearly two decades! You may be fluent in over six million forms of communication...but this book is a must have in any language! 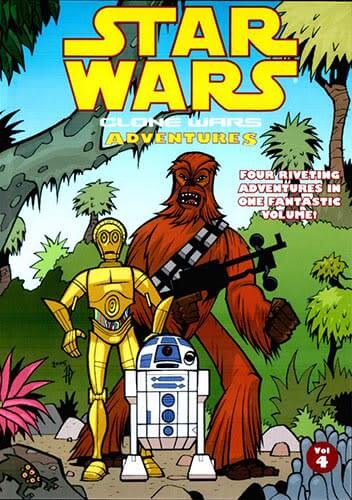 Written by
The Fillbach Brothers, Justin Lambros, Ryan Kaufman, Haden Blackman
Artwork by
The Fillbach Brothers, Rick Lacy
Part of the
Dark Horse Comics Clone Wars Adventures Series
Volume 4 contains four short, but action filled stories that fit perfectly in with the cartoon series. Another Fine Mess, The Brink, Orders, and Descent are all unrelated in plot, however Descent and Orders are set around the time of the execution of order 66. Best of all, this set of stories will entertain all ages and is a must have for a collector.

Four more tales of hyperkinetic Clone Wars action! As the Clone Wars burn across the galaxy and the true intentions of the Sith are revealed, the true heroes of the conflict emerge. Chewbacca leads the Wookiees against the Republic invaders on the jungle world of Kashyyyk; R2-D2 and C-3PO uncover a plot to assassinate Padme; an orphaned refugee witnesses the rough life of a Clone Trooper firsthand, and Anakin Skywalker fights alongside a young Jedi who will play a part in his descent into the dark side. More stories of harrowing danger and astonishing heroism - all done in the stripped-down, high energy style of the acclaimed Cartoon Network series. 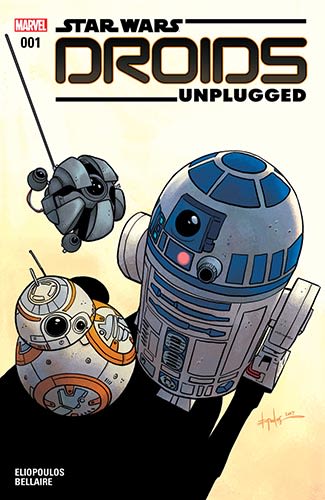 Written by
Chris Eliopoulos
Artwork by
Chris Eliopoiulos, Jordie Bellaire, Chris Eliopoulos
Part of the
This light read is a collection of short comics. Featuring Darth Maul's probe droids, R2-D2, and BB-8. Each of the three stories shares a bit of insight into a droids day-to-day life outside of battle. It is worth mentioning that the story focusing on Maul's droid has been printed before in the Darth Maul miniseries.

Collecting three stories featuring everyone's favorite droids! What adventures did the probe droids in The Phantom Menace get into when Darth Maul wasn't looking? Luke's got a mission for R2-D2! But can the astromech complete it in time? And all BB-8 wants is to help…two Resistance soldiers fall in love! 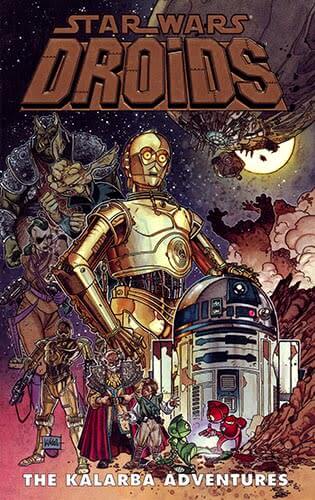 Written by
Ryder Windham
Artwork by
Ian Gibson
Part of the
Dark Horse Comics Droids Series
This 6 issue collection of short stories starring R2-D2 and C-3PO set between episodes 3 and 4. Our robotic duo is under the employment of the Pitareeze family. During their servitude, their daily lives are constantly interrupted by unwelcome dangers from pirates, thieves, and assassins. This cute compilation is perfect for young readers and collectors alike. There is also an introduction written by Anthony Daniels himself!
"Three movies and countless spin-off activities later, these comic books echo the spirit of Artoo-Detoo and See-Threepio to the letter. Some of the pages are as convincing in character to me, as though I were actually there, playing the part. When a character you have created and loved has been reproduced commercially in every way from bubble bath to bubble gum, you can get a little protective. But with these stories, I know Threepio is safe." ―Anthony Daniels
Masterpiece
Incredible
Good
Fair
Mediocre
#
in the Youtini Reading Order 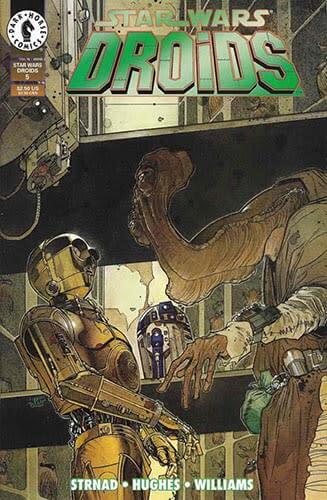 Written by
Jan Strnad
Artwork by
Bill Hughes
Part of the
Dark Horse Comics Droids Series
Told through the perspective of R2-D2 and C-3PO, this 4 issue collection is an enjoyable read for all ages. After unlikely droid rebellion leader C-3PO takes down Olag Greck, he hopes for a peaceful holiday on an Ithorian herdship. Unfortunately the herdship is inhabited by slaves under the influence of a new herb that makes them completely complacent. To make matters worse, R2-D2 contracts a virus causing him to protect the enslaved inhabitants at all costs!
The galaxy teeters on the brink of revolution, and See-Threepio and Artoo-Detoo are the only ones who can stop it!
Masterpiece
Incredible
Good
Fair
Mediocre
#
in the Youtini Reading Order

Written by
Chris Eliopoulos
Artwork by
Chris Eliopoiulos, Jordie Bellaire, Chris Eliopoulos
Part of the
Marvel Comics Darth Maul Mini-Series
"Probe Droid Problem" is a comic short story created by Chris Eliopoulos and Jordie Bellaire that was published in Darth Maul 1. It features a DRK-1 Dark Eye probe droid, and is set during the events of Star Wars: Episode I The Phantom Menace. Originnaly included as a back up story in Darth Maul (2017) #1 https://www.youtini.com/book/darth-maul-part-1 It was later collected in the one-shot Droids: Unplugged https://www.youtini.com/book/droids-unplugged-1
Masterpiece
Incredible
Good
Fair
Mediocre
#
in the Youtini Reading Order

Written by
Chris Eliopoulos
Artwork by
Chris Eliopoiulos, Jordie Bellaire, Chris Eliopoulos
Part of the
Star Wars UK Magazine Series
"SaBBotage" was a comic short story that was created by Chris Eliopoulos and Jordie Bellaire that accompanied the first issue of the comic series Star Wars: Poe Dameron. Originnaly included as a back up story in Poe Dameron #1 https://www.youtini.com/book/poe-dameron-1 It was later collected in the one-shot Droids: Unplugged https://www.youtini.com/book/droids-unplugged-1
Masterpiece
Incredible
Good
Fair
Mediocre
#
in the Youtini Reading Order

Written by
Chris Eliopoulos
Artwork by
Chris Eliopoiulos, Jordie Bellaire, Chris Eliopoulos
Part of the
Marvel Comics Star Wars (2015) Series
"Droid Dilemma" is a a comic short story created by Chris Eliopoulos and Jordie Bellaire that was published in Star Wars 25. It was in memory of Kenny Baker and features the character Baker portrayed, R2-D2. Originnaly included as a back up story in Star Wars (2015) #25 https://www.youtini.com/book/star-wars-25-5 It was later collected in the one-shot Droids: Unplugged https://www.youtini.com/book/droids-unplugged-1
Masterpiece
Incredible
Good
Fair
Mediocre
#
in the Youtini Reading Order

The Courtship of Princess Leia

You know those novels your mom always had by her bedside, the ones with half-shirtless Fabio embracing a dainty lady in a thin gown? Well this is kind of like that, but Star Wars style. Han finds out that Leia has arrangements to marry another man for political reasons, but he’s not having it. His plan? Kidnap Leia so she can’t get married to anyone else. That’s romantic, right?

Darth Vader and the emperor are dead, but the Empire lives on, and the Alliance must continue to struggle with dwindling supplies of cash and resources. Princess Leia, seeking new allies to bring into the Alliance and a new planet as home for the influential refugees of Alderaan, considers a proposal that could tip the balance of power against the evil Empire. The Hapes consortium, a cluster of 63 high-tech worlds, is ruled by the Queen Mother. She wants Leia to marry her son, the dashing and wealthy Prince Isolder.

When Han Solo hears the news of Leia's impending nuptials, he reacts with shock. Han has always dreamed of marrying Leia. Yet, in spite of his heroic exploits, he feels she sees him as nothing more than a rogue and a pirate, unworthy of her hand. Now he makes a desperate last gamble to win her back. Tricking Leia into accompanying him, Han flees with her to the beautiful and untamed planet Dathomir, where he hopes to win her heart.

Fearing the imperious queen's reaction to Han's rash move, Luke Skywalker forms an unlikely alliance with Prince Isolder to track down the runaways. Luke has been traveling the far reaches of the galaxy in search of the scattered lore of the Jedi Knights. But when he, Artoo, and Isolder set off to Dathomir, Luke does not suspect that he is beginning an adventure that will lead to the discovery of an awesome treasure, a group of Force-trained "witches"...and a showdown with an invincible foe.