Star Wars books you should read if you like
Prince Xizor

This is some text inside of a div block.
Prince Xizor

“He never felt more so himself than when he was manipulating things to his satisfaction.”

erhaps the slimiest crime lord to ever grace the under levels of coruscant, Prince Xizor leads the Black Sun in the less-than-scrupulous activities around the galaxy. Slavery. He’s your guy. Drugs? Xizor manages the market. Black market weapons? You guessed it. On top of all that, the Falleen uses his pheromones to cause females to lust after him against their wills (yep huge yikes)  and do his bidding. . . That part didn’t age so well but is believable in its own way. Needless to say, it’s not hard to dislike the green-skinned, purple-clad crime lord with a top knot. He is, after all, a predator in every way.

In addition to his appearance, prestige, and general unsavoriness, Xizor’s character is defined by his relationships with the other characters of the Star Wars universe. His rivalry with Darth Vader is not too dissimilar from that of Dwight Shrute and Andy Bernard competing to be Michael Scott’s right-hand-man in The Office (which of course makes the Emperor Michael Scott in this analogy). Or, to use another analogy, this kind of petty backstabbing is largely akin to Mean Girls. Beyond Vader, Xizor becomes enamored with Princess Leia in a super creepy way, obsessed with killing Luke Skywalker, and secretly hated by Dash Rendar. Talk about drama.

It’s easy to see why Xizor hasn’t caught on compared to the likes of Thrawn, for instance. On the one hand,  it is due to the fact that Thrawn had a singular author in Timothy Zahn to shepherd his character across multiple eras of Star Wars storytelling, whereas Xizor’s creator, Steve Perry, penned one and only one Star Wars book in its entirety, plus a few others in partnership with Michael Reaves (the MedStar duology, Death Star, and a short story). On the other hand, it has to do with Xizor’s manipulation of individuals through the use of his powerful pheromones being a little less savory than Thrawn’s art appreciation skills. . . Regardless, Xizor’s story did extend beyond his grand entrance in Shadows of the Empire. A handful of Legends appearances give weight to Xizor’s dominance in the criminal underworld. Shadow Games, from the aforementioned Michael Reeves and Maya Katherine Bonhoff, pays homage to Shadows of the Empire with a Xizor and Dash Rendar-centric prequel story. Xizor functions as an adequate villain throughout Legends whenever Black Sun’s criminal gang serves the story, such as Scoundrels by Timothy Zahn, or Reeves & Bonhoff’s Coruscant Nights series.

Xizor even appears to have popped up as an animated Easter Egg in the Clone Wars revival  alongside other shady characters such as Dryden Vos. The mere existence of Maul and Vos alongside a Falleen in a Canon show begs the question if they will reappear in more stories to come. The future is unclear but exciting nonetheless! Xizor would certainly fit alongside Maul, Q’ira, and the Pikes if the Crimson Dawn syndicate is further explored. That being said, maybe having Donald Glover’s Lando and Xizor in the same frame would be too much charisma for the pixels to contain.

What do you think of the Purple Prince? The one with the pheromones, not the musician. How does he stack up alongside other proprietary villains from the Expanded Universe? Be sure to check out our massively collaborative Shadows of the Empire crossover event over on Youtube.com/youtini.

Written by
Michael Reaves
Artwork by
Part of the
Coruscant Nights Series
Kanan Jarrus and Cal Kestis were not the first Jedi survivors forced into hiding when the Galactic Republic fell. In Legends, one Jedi -- believed to be the last of his kind -- fled to the depths of Coruscant to avoid the worst of the Empire’s wrath. Not to be confused with the novelization of the film of the same name, this The Last Jedi novel follows an Order 66 survivor as he risks his life time and again to avoid detection by Darth Vader. In a time where being Force-sensitive is the worst thing you can be, Jax Pavan must find a way to stop the Empire without letting them know he’s alive.

Ever since Emperor Palpatine's Order 66--which called for the execution of all Jedi--Jax Pavan is the last Knight around to fight the dark side of the Force. Together with his droid I-5, Jax has eluded Vader time and again, all the while wreaking havoc against the Empire through the underground resistance on Coruscant. But now the Rebel's leader on the city-planet has been captured, and it's up to the Last Jedi to ride again...possibly for one final adventure. 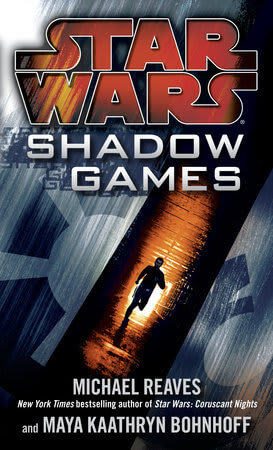 Written by
Michael Reaves and Maya Kaathryn Bohnhoff
Artwork by
Part of the
Legends Stand Alone Novels
The massive multimedia storytelling experience Shadows of the Empire introduced Star Wars fans to wannabe Han Solo Dash Rendar, captain of the Outrider. This is the one and only novel to feature Dash as the protagonist, off on his own adventure with his crew, set prior to the Battle of Yavin. Shadow Games is a fun, lighthearted romp in a galaxy far, far away that is humorously self-aware. Rendar is tasked with protecting a famous holo-singer from an assassination plot and soon comes to realize that she’s tangled up with the notorious criminal gang, Black Sun, and its leader Prince Xizor himself. . .