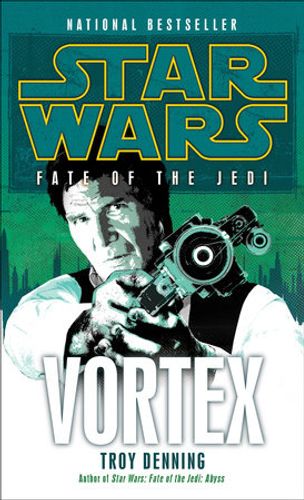 By
Troy Denning
Released
Nov 30, 2010
Artwork by
Narrated by
Marc Thompson
Takes place in
44 ABY
In the
Legacy
era
Part of the
Fate of the Jedi Series
Collects
Good
7.8
7.8
7.8
Community Rating
#
123
in the
Youtini Reading Order

Publisher's SummaryBooks in this SeriesYoutini ReviewVideo ReviewStaff ReviewsCommunity ReviewsVideosCollections
Loaded with betrayal, a faked death, the breakdown of the Jedi-Sith alliance, a revelation of the Jedi Queen, an assassination of a beloved character, and a schism within the ranks of the Jedi Council, Vortex is a hard-hitting book with plenty of gravitas to propel you forward in the series.

In a stunning turn of events, Luke Skywalker and his son, Ben, joined forces with the Sith armada sent to kill them—and used their combined might against the monstrous being Abeloth. But when the wounded creature escapes, the fragile armistice crumbles, and hostilities resume with the attempted assassination of Luke.

View the entire
Fate of the Jedi Series