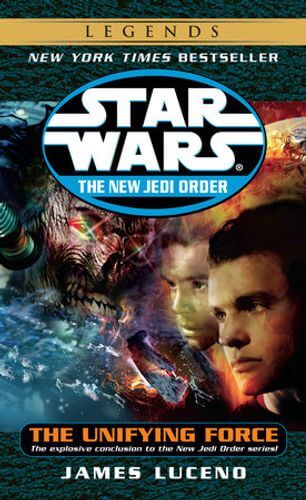 Publisher's SummaryBooks in this SeriesYoutini ReviewVideo ReviewStaff ReviewsCommunity ReviewsVideosCollections
The Yuuzhan Vong near ultimate victory in their quest to conquer the galaxy. The floundering Alliance is on the brink of total collapse. Meanwhile, some of its greatest heroes have vanished in its most dire time of need. However, an uprising from among the Yuuzhan Vong’s own ranks and a strange new toxin known as Alpha Red offer a small ray of hope. As the final moves of the war are made, Luke, Han, and Leia are desperate to stop the Yuuzhan Vong and save their galaxy once and for all...no matter the cost.With this novel, James Luceno takes readers on one final ride in the climactic conclusion of the lengthy New Jedi Order series.

The Galactic Alliance's hard-won success in combating the extragalactic Yuuzhan Vong has proven all too brief—and the tide has turned again to the invader's advantage. The Yuuzhan Vong, having overcome the strategies of the Jedi and their allies, have pushed deeper into the galaxy and conquered more worlds. Coruscant has been remade into the capital of the extragalactic aliens and renamed Yuuzhan'tar. The remaining defenders of the galaxy are struggling to form a united front. Luke, Mara and Jacen are missing in action. Clearly the stage is set for endgame.

While Han and Leia receive the horrifying news that hundreds of high-ranking Alliance prisoners face death in a sacrifice to the alien invader's bloodthirsty gods, Luke and his team try to persuade Zonama Sekot to help in the war effort. Yet as they speak, the Alliance capital world Mon Calamari is under attack.

At the same time, the Jedi's alliances throughout the galaxy are being tested and the chances of an Alliance victory are being jeopardized by rogue factions determined to deploy the lethal Alpha Red that will exterminate the entire Yuuzhan Vong species. Also among the Yuuzhan Vong, there is a threat of revolt by the oppressed lower classes of their society. Oppressed Shamed Ones and high-ranking officials alike fear that their Supreme Overlord Shimrra's actions will provoke the wrath of their gods. Ultimately, for both opposing forces, too much has been sacrificed and too much is at stake. And now, the final battle between the Yuuzhan Vong and the Galactic Alliance.