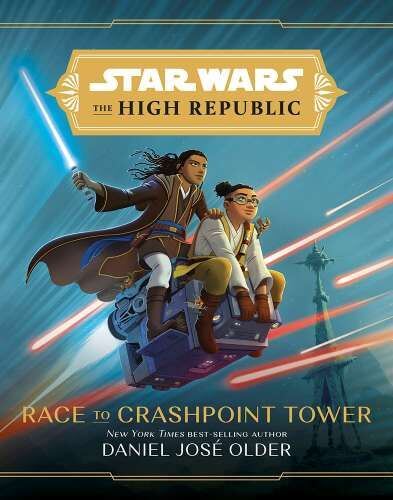 By
Daniel José Older
Released
Jun 29, 2021
Artwork by
Narrated by
Takes place in
231 BBY
In the
High Republic
era
Part of the
The High Republic Series
Collects
Community Rating
#
in the
Youtini Reading Order

Publisher's SummaryBooks in this SeriesYoutini ReviewVideo ReviewStaff ReviewsCommunity ReviewsVideosCollections
Older is writing a middle grade book, Race to Crashpoint Tower. It focuses on the Republic Fair and a new mechanic Jedi, Ram Jamoram, wants to hide in his garage. Crashpoint also contains new creatures, the Bonbraks, who hang out with Ram in his shop, and it’s a good thing because we needed some cuteness to balance out the Nihl and the Drengir! The story follows Lula Talisola (from Older’s High Republic Adventures from IDW) who hangs out with Vernestra Rwoh (from A Test of Courage). Plus a new droid! Who doesn’t love a new droid?

The High Republic: Race to Crashpoint Tower is a junior novel written by Daniel José Older and published by Disney–Lucasfilm Press as part of the Star Wars: The High Republic publishing campaign. It was announced at New York Comic Con 2020 in a virtual panel. It will take place around the same time as The High Republic: The Rising Storm.

Emma Parke
Video Host & Producer
_Race to Crashpoint Tower_, being a junior novel, didn’t release with the same level of expectations as a book like _The Rising Storm_. When will we ever learn to not underestimate Star Wars junior novels? This book was brilliantly written by Daniel José Older, incorporating elements from all over the second wave of the High Republic as well as characters from his comic series, _The High Republic Adventures_. Reading _The Rising Storm _without reading this book doesn’t give you the whole story: _Race to Crashpoint Tower_ contains some absolutely essential information regarding the events at the Republic Fair. And not only was the plot exciting and tied in well to its adult novel counterpart, the story flowed beautifully with quieter moments between characters. Don’t sleep on this book just because of its target audience: _Race to Crashpoint Tower _is a phenomenal read with more great High Republic lore.