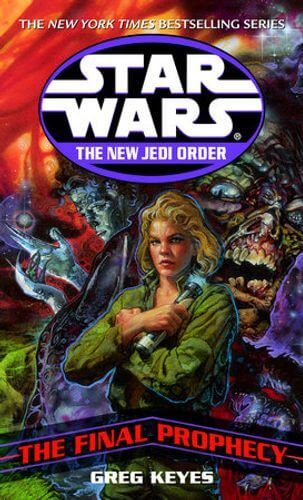 Publisher's SummaryBooks in this SeriesYoutini ReviewVideo ReviewStaff ReviewsCommunity ReviewsVideosCollections
The Final Prophecy is the penultimate entry in the inordinately massive New Jedi Order series. It sets up the finale in a number of ways, most significantly with the story of Nom Anor, the Shamed Ones, and the living planet Zenoma Sekot—which is a beacon of hope to some and a terrible threat and reminder of the Yuuzhan Vong’s past to others. It also contains key character development for Tahiri Veila as she battles to regain her identity after having been brainwashed by the Yuuzhan Vong.

As a beleaguered galaxy fights its way back from the brink of destruction, the Jedi's most fearsome enemy plots to end the war—and claim victory—with a final act of domination….

The troubles for the embattled living planet Zonama Sekot have just begun. As Luke Skywalker and Jacen Solo negotiate its place in the galactic struggle against the Yuuzhan Vong, one of its organic ships is taken by the alien invaders. Scientist Nen Yim is ordered to use the captive to find weak spots in Zonama Sekot's technology. But what Nen Yim discovers about the planet and its mysteries shocks her to the core. Clearly her people have gone terribly astray. For the peace-loving planet harbors not only the key to its own destruction, but the long-forgotten secrets of the Yuuzhan Vong themselves.

Meanwhile, General Wedge Antilles, commanding one fleet in a three-pronged campaign to retake the Bilbringi system, is suddenly stranded deep in Yuuzhan Vong space, cut off from all contact. Wedge and his ships must rely on trickery and brilliant battle tactics if they are to survive long enough to ensure the success of one of the deadliest and most crucial missions the Galactic Alliance forces have ever seen….