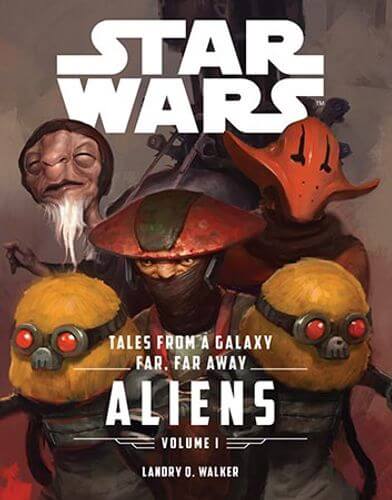 Tales from a Galaxy Far, Far Away: Aliens

By
Landry Q. Walker
Released
Apr 5, 2016
Artwork by
Narrated by
Takes place in
33 ABY
In the
Rise of the First Order
era
Part of the
Journey to Star Wars: The Force Awakens Series
Collects
Masterpiece
Incredible
Good
Fair
Mediocre
Community Rating
#
163
in the
Youtini Reading Order

Publisher's SummaryBooks in this SeriesYoutini ReviewVideo ReviewStaff ReviewsCommunity ReviewsVideosCollections
In a bit of a return to form to the “Tales” books of Legends EU (Tales from the Mos Eisley Cantina, Jabba’s Castle, etc), Landry Q. Walker wrote this anthology to flesh out the backstories of some of the ancillary creatures seen on screen in The Force Awakens. While not a particularly consequential book, it’s an absolute blast and will enhance your appreciation for the new characters established in Episode VII. He was able to switch between several different genres with the various short stories—a classic pirate adventure story about Sidon Ithano (the red alien Finn almost splits with), a horror story about what’s happening in the basement of Man Kanata’s castle, even a Clint Eastwood-esque Western starring infamous peg warmer Constable Zuvio in place of Clint Eastwood. While labeled as “Volume I,” a Volume II is yet to follow (though perhaps Canto Bight is a spiritual successor for The Last Jedi).

The worlds of Star Wars are full of countless alien species, each stranger and more fascinating than the last. Here you'll find six stories for kids about just some of the amazing aliens who appear in the smash-hit movie Star Wars: The Force Awakens. Featuring a dashing tale of piracy and double crosses, the story of a wise Jakku constable and an unfortunate droid, and a mystery that can be solved only by the gruff cook at Maz Kanata's castle, this collection will bring thrills and chills as it takes you deep into the corners of your favorite galaxy far, far away. . . .

- Constable Zuvio must get to the bottom of things when a faithful droid commits a bank robbery in "High Noon on Jakku."

- The Frigosian cryptosurgeons of Takodana give a criminal on the run just what she asks for in "The Face of Evil."

- The repugnant scrap trader Unkar Plutt may finally have met his match in the twisty tale "True Love."

- Bobbajo the Crittermonger spins a tale of bravery against impossible odds in the fable "All Creatures Great and Small."

- When his sous chef turns up dead, the cook at Maz Kanata's castle holds an unusual competition to find the culprit in "A Recipe for Death."

- And pirates, gangs, and bounty hunters alike race to find precious cargo in "The Crimson Corsair and the Lost Treasure of Count Dooku."