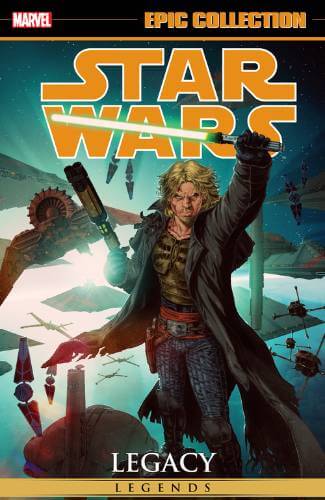 Publisher's SummaryBooks in this SeriesYoutini ReviewVideo ReviewStaff ReviewsCommunity ReviewsVideosCollections
The epic battle between Cade Skywalker and Darth Krayt comes to a climactic conclusion in the third volume of Marvel’s Legends Epic Collection of Ostrander and Dursema’s Legacy run for Dark Horse Comics. The only way for Krayt to defy death that threatens to rob him of his empire is to harness the healing abilities of Anakin and Luke Skywalker’s descendent, Cade. Cade wants nothing to do with his family’s Jedi business, however, but finds himself locked in a duel of fates with one of the most powerful Sith Lords to wreck havoc upon the galaxy. This time, Cade travels back to where it all began—the Skywalker homeward of Tatooine—where he’s confronted by the Force ghost of Luke Skywalker himself! From there, Cade’s crew confronts his own demons on the infamous home to Palpatine’s ancient vaults (and the setting for Timothy Zahn’s The Last Command) on the world of Wayland. There’s a three-way battle between Jedi, Sith, and Imperial Knights, and ultimately the final showdown between Skywalker and the dying, crazed Sith Emperor Darth Krayt.

Cade Skywalker and his crew are back to their old pirating ways, but soon find themselves stranded on Tatooine - with a trio of Black Sun assassins on their trail! Elsewhere, Imperial deep-cover agent Morrigan Corde has plans of her own. She'll stop at nothing to find Cade...but the ghost of Luke Skywalker just might find him first! Meanwhile, with Darth Krayt missing, the evil Sith Darth Wyyrlok has proclaimed himself the new emperor of the galaxy. But the other Sith have their own ideas! And when the overthrown Empire-in-exile prepares to take back control of the galaxy with their own Force users, will the Jedi join them to defeat a common enemy? In the far future of Star Wars, nothing is what it seems! Collects: Legacy (2006) #37-40, #42-50, Legacy - War (2010) #1-6