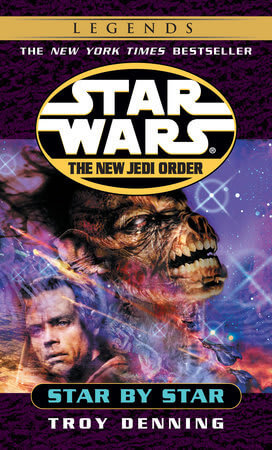 Publisher's SummaryBooks in this SeriesYoutini ReviewVideo ReviewStaff ReviewsCommunity ReviewsVideosCollections
Star by Star is a major turning point in the New Jedi Order series. A massive strike team consisting of Jacen, Jaina, Anakin, and many other young Jedi must infiltrate a Yuuzhan Vong worldship. They are tasked with taking out a cloning lab for voxyn—vicious beasts bred from the vornskyrs native to Mykyr—who specialize in hunting Jedi. The mission is incredibly hard-fought and has devastating consequences for our heroes, for whom life will never be the same.

It is a solemn time for the New Republic, as the merciless Yuuzhan Vong continue their ruthless campaign of terror and destruction. The brutal enemy has unleashed a savage creature capable of finding—and killing—Jedi Knights. And now Leia Organa Solo faces a terrible ultimatum from the mighty alien foe determined to conquer the galaxy. If the location of the secret Jedi base is not revealed within one week, the Yuuzhan Vong will blast millions of refugee ships into oblivion.

As the battered but still unbroken Jedi scramble to deal with the newest onslaught, Leia's son Anakin lays out a daring plan. A Jedi strike force will allow itself to be "captured" by the Yuuzhan Vong and taken to their stronghold in the realm of darkness, where the Jedi will sabotage the evil empire's deadliest weapons. The leaders of the force are the three Solo siblings. The risks are tremendous. Can the Jedi fight a ruthless enemy without becoming ruthless themselves and falling victim to the dark side?

Andrew Bell
Video Department Coordinator
Oh man. This is a hard one. I think this is the first NJO book since Vector Prime that made me really feel the weight of the situation. It's probably the only Star Wars book that'd I would describe as a tome. I don't have much to say about it other than you're in for a ride.