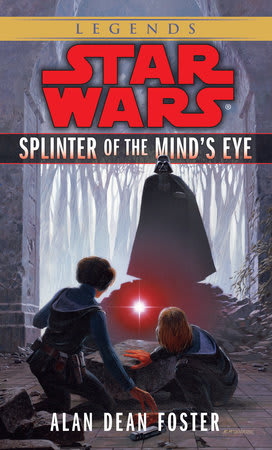 Splinter of the Mind's Eye

By
Alan Dean Foster
Released
Feb 12, 1978
Artwork by
Narrated by
Takes place in
2 ABY
In the
Rebellion
era
Part of the
Splinter of the Mind's Eye Series
Collects
Masterpiece
Incredible
Good
Fair
Mediocre
The first Expanded Universe novel is an off-kilter adventure story, loaded with weirdness.
Community Rating
#
212
in the
Youtini Reading Order

Alan Dean Foster’s Splinter of the Mind’s Eye—written as a potential sequel to A New Hope—is a fascinating look at the direction the Star Wars saga may have gone. After crash landing on a jungle planet, Luke and Leia once again find themselves pitted against the Empire. But before they can escape, they must investigate local rumors of something known as a "Kaiburr crystal"—an object in which Darth Vader also has great interest.

Stranded on a jungle planet, Luke Skywalker and Princess Leia found themselves desperately racing Imperial Stormtroopers to claim a gem that had mysterious powers over the Force.

Luke Skywalker expected trouble when he volunteered to follow Princess Leia on her mission to Circarpous to enlist their Rebel underground in the battle against the Empire. But the farm boy from Tatooine hadn't counted on an unscheduled landing in the swamplands of Mimban…hadn't counted on any of the things they would find on that strange planet.

Hidden on this planet was the Kaiburr crystal, a mysterious gem that would give the one who possessed it such powers over the Force that he would be all but invincible. In the wrong hands, the crystal could be deadly. So Luke had to find this treasure and find it fast.

Accompanied by Artoo-Detoo and See-Threepio—his two faithful droids—Luke and the Princess set out for the Temple of Pomojema…and a confrontation deep beneath the surface of an alien world with the most fearsome villain in the galaxy!

Check Out the entire
Splinter of the Mind's Eye Series
 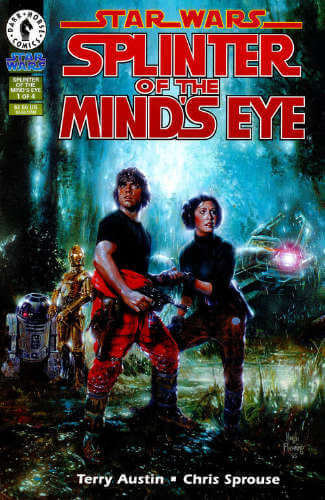 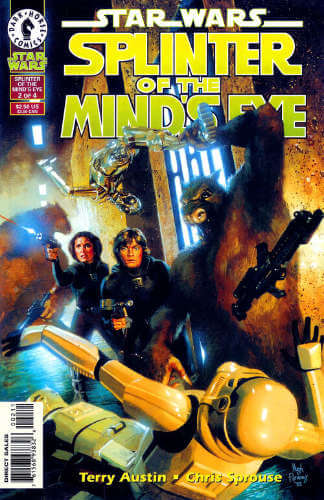 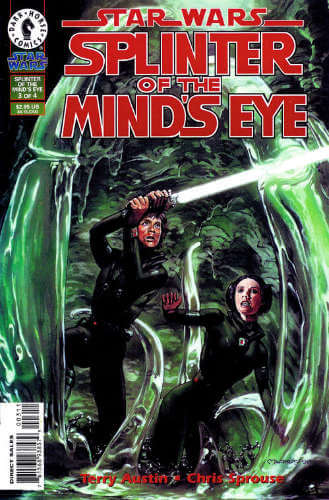 Jared Mayes
Legends Lookback Lead Host
Splinter of the Mind's Eye is an artifact from a bygone era and a Star Wars universe without the Empire Strikes Back. While the book is a massive swing and a miss in terms of capturing the magic of the space opera genre and the heart of the core characters, it is an important book in the history of Star Wars. In many ways, the behind-the-scenes of Splinter of the Mind's Eye is even more interesting than the book itself and will enhance your experience if you do some digging. It's a wild ride, that's for sure. This book endures as a great piece of perspective on just how far Star Wars has come since the 70s!

Heather Goldman
Community Department Manager
I've occasionally started this book over from the beginning over the past 10 years never being able to get past the first two chapters. After being asked to join the Legends Lookback podcast episode for this novel, I finally powered through it and was rewarded with a nice, steaming cup of "what the force?!". If you pick up this novel with the proper mindset, the story is actually entertaining in a goofy and slightly interesting way. Splinter of the Mind's Eye was basically Star Wars' "Plan B" in case a proper sequel was never made. Imagine what that world would have been like! If you think about it as looking into an alternate universe, then it's really not that bad of an experience. If you have some time to kill, I say give it a shot just for kicks. I don't want to give away any surprises, but some parts will make you rofl.

Meg Dowell
Editor-in-Chief
Welcome to the first-ever Star Wars legends book! As you prepare to dive into this often overlooked tale, keep in mind that it's been over 40 years since its publication, and no one -- not even Lucas himself -- knew exactly where Star Wars was headed at the time. Think of it as "the sequel before The Empire Strikes Back." It's weird, and wild, and it's probably not like most of the Star Wars books you've previously read. But if you approach it willing to sit back and have a good time, you'll have a worthwhile experience for sure. I don't think I'll ever read it again (not my favorite portrayal of Leia, let's put it that way), but I'm glad I tried it once. At the very least, it's worth having in your collection, being the first of its kind.