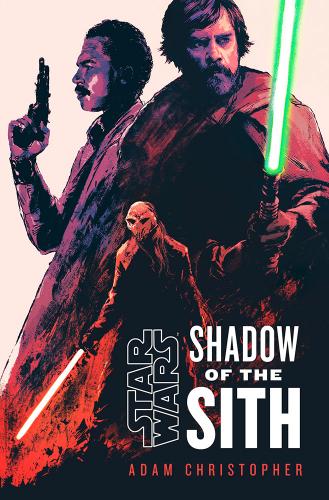 By
Adam Christopher
Released
Jun 28, 2022
Artwork by
Narrated by
Takes place in
21 ABY
In the
New Republic
era
Part of the
Stand Alone Canon Novels
Collects
Masterpiece
Incredible
Good
Fair
Mediocre
With Shadow of the Sith, Adam Christopher succeeds in crafting an original, pivotal story that not only supplements the Sequel Trilogy in an entirely new way, but also stands on its own as a critical expansion of dark side lore and familial love.
Community Rating
#
42
in the
Youtini Reading Order

Shadow of the Sith is an adult novel by Adam Christopher and will focus on Luke Skywalker, Lando Calrissian and the growing threat of the Sith Eternal.

Luke Skywalker and Lando Calrissian return in this essential novel set between Return of the Jedi and The Force Awakens.

The Empire is dead. Nearly two decades on from the Battle of Endor, the tattered remnants of Palpatine's forces have fled to the farthest reaches of the galaxy. But for the heroes of the New Republic, danger and loss are ever-present companions, even in this newly forged era of peace.

Jedi Master Luke Skywalker is haunted by visions of the dark side, foretelling an ominous secret growing somewhere in the depths of space, on a dead world called Exegol. The disturbance in the Force is undeniable . . . and Luke's worst fears are confirmed when his old friend, Lando Calrissian, comes to him with reports of a new Sith menace.

After his daughter was stolen, Lando searched the stars for any trace of his lost child. But every new rumor only led to dead ends and fading hopes—until he crossed paths with Ochi of Bestoon, a Sith assassin tasked with kidnapping a young girl.

Ochi's true motives remain shrouded to Luke and Lando. For on a junkyard moon, a mysterious envoy of the Sith Eternal has bequeathed a sacred blade to the assassin, promising that it will give him answers to the questions that have haunted him since the Empire fell. In exchange, he must complete a final mission: return to Exegol with the key to the Sith's glorious rebirth—the granddaughter of Darth Sidious himself, Rey.

As Ochi hunts Rey and her parents to the edge of the galaxy, Luke and Lando race into the mystery of the Sith's lingering shadow and aid a young family running for their lives.

Read Our Full Review

Masterpiece
Incredible
Good
Fair
Mediocre
With Shadow of the Sith, Adam Christopher succeeds in crafting an original, pivotal story that not only supplements the Sequel Trilogy in an entirely new way, but also stands on its own as a critical expansion of dark side lore and familial love.