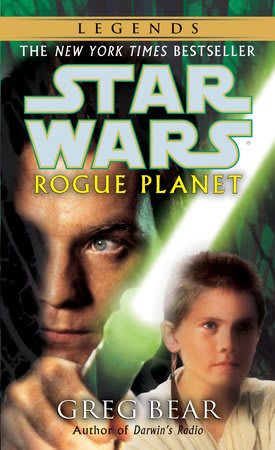 By
Greg Bear
Released
May 2, 2000
Artwork by
Narrated by
Michael Cumpsty
Takes place in
29 BBY
In the
Rise of the Sith
era
Part of the
Legends Stand Alone Novels
Collects
Masterpiece
Incredible
Good
Fair
Mediocre
Bear's character study on Anakin and Obi-Wan is not the most exciting Legends title, but it's still worth checking out.
Community Rating
#
159
in the
Youtini Reading Order

In Rogue Planet, we find Jedi Master Obi-Wan Kenobi a few years into his training of Anakin Skywalker, said to be the Chosen One by the late, great Qui-Gon Jinn. Chosen One or not, Anakin is quite the troublemaker, and the Jedi Council decide it best for him to pour his energy into a mission rather than illegal races in Coruscant's underbelly. Along with Obi-Wan, Anakin is sent to investigate the disappearance of a Padawan named Vergere and see how it relates to the purchase of a unique Sekotan spacecraft on the mysterious planet Zonama Sekot.

Greg Bear gives readers a story that focuses on a unique time in Anakin's training. The planet Zonama Sekot and the character of Vergere have some important implications later in the EU, though those implications do nothing to hamper the enjoyment of Rogue Planet as a standalone story.

The Force is strong in twelve-year-old Anakin Skywalker . . . so strong that the Jedi Council, despite misgivings, entrusted young Obi-Wan Kenobi with the mission of training him to become a Jedi Knight. Obi-Wan? like his slain Master Qui-Gon?believes Anakin may be the chosen one, the Jedi destined to bring balance to the Force. But first Obi-Wan must help his undisciplined apprentice, who still bears the scars of slavery, find his own balance.

Dispatched to the mysterious planet of Zonama Sekot, source of the fastest ships in the galaxy, Obi-Wan and Anakin are swept up in a swirl of deadly intrigue and betrayal. They sense a disturbance in the Force unlike any they have encountered before. It seems there are more secrets on Zonama Sekot than meet the eye. But the search for those secrets will threaten the bond between Obi-Wan and Anakin . . . and bring the troubled young apprentice face-to-face with his deepest fears?and his darkest destiny.

Read Our Full Review

Masterpiece
Incredible
Good
Fair
Mediocre
Bear's character study on Anakin and Obi-Wan is not the most exciting Legends title, but it's still worth checking out.