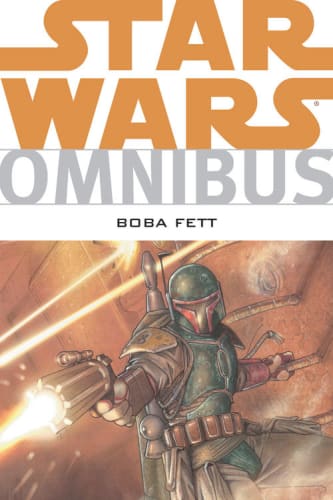 Publisher's SummaryBooks in this SeriesYoutini ReviewVideo ReviewStaff ReviewsCommunity ReviewsVideosCollections
This collection of Dark Horse comics has more Boba Fett than you thought was possible. We see his lines of loyalty called into question and his true talents on display, as he battles the Rebels, the Empire, other Bounty Hunters, Darth Vader, and even himself!

Boba Fett, the most feared, most respected, and most loved bounty hunter in the galaxy now has all of his comics stories collected into one massive volume!

In these stories, Boba Fett gets caught between the Rebellion and the Empire; seeks a mysterious relic from a wrecked Star Destroyer; settles a diplomatic dispute — with extreme prejudice; takes part in a bounty-hunter free-for-all; fights Darth Vader; and even goes up against a Boba Fett imposter! There’s no job too deadly for the man in Mandalorian armor!