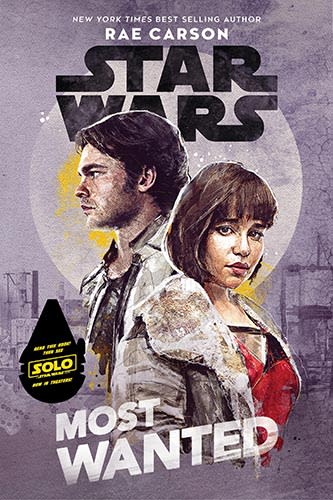 By
Rae Carson
Released
May 25, 2018
Artwork by
Narrated by
Saskia Maarleveld
Takes place in
13 BBY
In the
Reign of the Empire
era
Part of the
Stand Alone Canon Novels
Collects
Masterpiece
Incredible
Good
Fair
Mediocre
Community Rating
#
13
in the
Youtini Reading Order

Set before Solo: A Star Wars Story, Rae Carson gives us a glimpse into how Han and Qi’Ra’s relationship began. In a story that gives us a glimpse into life with the White Worms and on the streets of Corellia, we see the pair start out as rivals pitted against each other by Lady Proxima and evolve into the duo we see at the beginning of the film, getting help along the way from intriguing new characters after their job takes a messy turn.

Don’t let the ‘young adult’ tag deter you: Most Wanted is a fast-paced heist adventure with just enough twists to keep you guessing while it keeps you turning pages. The extra depth and gravitas it lends to Han and Qi’Ra’s relationship may well change the way you see that spaceport scene and Qi’Ra’s fateful decision aboard Dryden Vos’s yacht.

Han and Qi'ra don't have a lot in common other than not having a lot. They're street kids on the industrial planet Corellia, doing whatever it takes to get by, dreaming of something more. They each jump at a chance to prove themselves in the perilous world of Corellia's criminal underbelly, only to discover they are on the same mission for the same unscrupulous boss. When the job goes disastrously wrong, Han and Qi'ra are on the run - from pirates, a droid crime syndicate, the Empire, and their boss - and will have to learn to trust each other if they are going to survive.