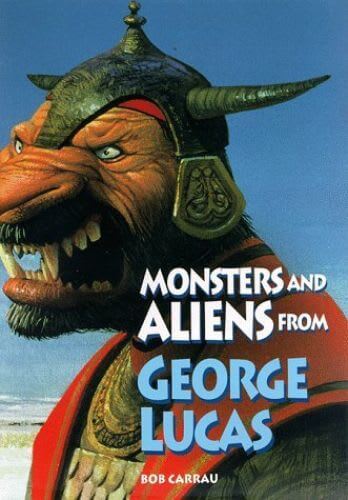 Monsters and Aliens from George Lucas

Some of the most bizarre monsters & aliens ever seen populate the films of George Lucas, creator of the Star Wars trilogy. Here are portraits & descriptions of a never-before-assembled group of Lucas' eeriest strangelings & other-worldly beings. Sometimes beautiful, sometimes horrifying, & often hilarious, the 31 full-color images presented in this book are drawn from paintings of creatures seen in Lucasfilm movies, artist's renderings of oddballs not yet built, film stills, & photos. The text is an amusing compendium of interesting personal data in the form of diary entries, recipes, resumes [sic], want ads, & weight-training routines. Sufficiently witty, sophisticated, & engaging for adults, this book is scary enough for any child. Leland Chee has indicated that information in the book is non-canonical. However, a couple of elements have been known to make their way into continuity through other publications.[1] Canonical species mentioned within the non-canonical text of the book include: Duros, Gamorreans, Hutts, Ithorians, and the Rancor. Additionally, the world of Endor and the character Terak is mentioned, the latter identified as a "Known Associate" of "The Marauder of Endor". The book introduced the character Dyslogia Twang, who later reappeared in HoloNet News Vol. 531 53. Po Ruddle Lingsnot, a character from The Illustrated Star Wars Universe, appears to also have been inspired by this book. Musings of an Ithorian was later republished on Hyperspace. "Smapp", "Barium liquid" and "Manta pear" were mentioned in Dining at Dex's, a Hyperspace exclusive article. The planet Lusaanda was also indirectly mentioned in the Online Companion of The Essential Atlas through the inclusion of the Lusaanda system. The tabloid Galactic Gossip was mentioned in part three of Barely Tolerable: Alien Henchmen of the Empire.