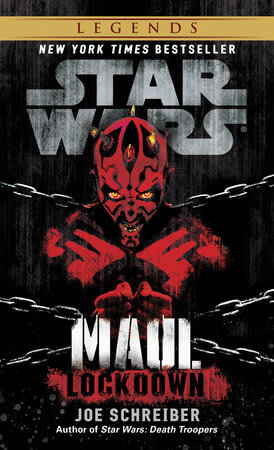 By
Joe Schreiber
Released
Jan 28, 2014
Artwork by
Narrated by
Jonathan Davis
Takes place in
33 BBY
In the
Rise of the Sith
era
Part of the
Legends Stand Alone Novels
Collects
Masterpiece
Incredible
Good
Fair
Mediocre
A dark and furious character story featuring Maul at his most lethal.
Community Rating
#
85
in the
Youtini Reading Order

Darth Plagueis and Darth Sidious discover a way to annihilate the Jedi before they can even comprehend that the Sith still exist. But this plan involves a certain nuclear device, so the Sith Lords send their deadly apprentice to a prison colony to find the merchant who owns it. While Maul dukes it out with the prisoners in a fight-to-the-death contest in search for the target, Plagueis and Sidious plot against each other in how they'll use the weapon for their own personal gains.

Darth Maul is a favorite among many when it comes to Sith characters, and the merciless brutality he displays like that in Maul: Lockdown is probably why. Author Joe Schrieber has effortlessly integrated the genre of horror into the Star Wars universe, and using the most menacing-looking character to do it calls for a bloody good time.

It's kill or be killed in the space penitentiary that houses the galaxy's worst criminals, where convicts face off in gladiatorial combat while an underworld gambling empire reaps the profits of the illicit blood sport. But the newest contender in this savage arena, as demonic to behold as he is deadly to challenge, is fighting for more than just survival. His do-or-die mission, for the dark masters he serves, is to capture the ultimate weapon: an object capable of obliterating the Jedi and conquering the galaxy.

Sith Lords Darth Plagueis and Darth Sidious are determined to possess the prize. And one of the power-hungry duo has his own treacherous plans for it. But first, their fearsome apprentice must take on a bloodthirsty prison warden, a cannibal gang, cutthroat crime lord Jabba the Hutt, and an unspeakable alien horror. No one else could brave such a gauntlet of death and live. But no one else is the dreaded dark-side disciple known as Darth Maul.