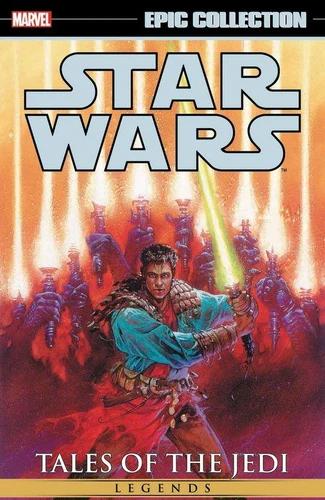 An Epic Collection trade paperback focused in the Star Wars: Tales of the Jedi series.

The history of the Old Republic! Five thousand years before Luke Skywalker, the Sith Empire rules the galaxy at the height of its powers - but the Great Hyperspace War could lead to their downfall! Then, a millennium later, two Jedi legends emerge: Nomi Sunrider, who takes up her murdered husband's lightsaber, and Ulic Qel-Droma, who discovers the final resting place of fallen Jedi Freedon Nadd - who may not be at rest after all! Can they save the Holocron containing all of Jedi history, or will the dark side of the Force triumph?

Tales of the Jedi: The Golden Age of the Sith #0-5

Tales of the Jedi: The Fall of the Sith Empire #1-5

Tales of the Jedi: The Freedon Nadd Uprising #1-2