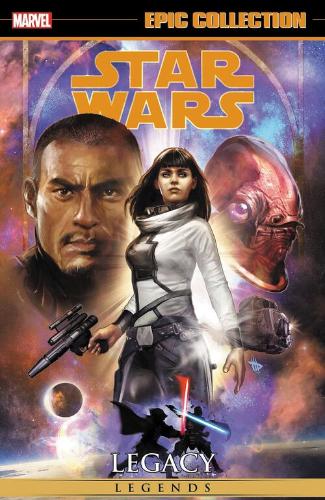 This is a Epic Collection trade paperback that collects issues from the Legacy era.

The end of an era! Nearly 140 years after Star Wars Episode IV: A New Hope, the galaxy is struggling to maintain a newfound peace. Ania Solo is trying to eke out a meager living by salvaging debris from the recently ended war — but when she stumbles upon a damaged communications droid and a stray lightsaber, she and her friends find themselves in deep trouble! Wanted by both the local authorities and a very determined Imperial Knight, Ania will soon learn that the lightsaber is at the center of a deadly plot — one that leads straight back to the villainous Sith! And, at the very end of the Star Wars Legends timeline, discover the final fate of C-3PO!