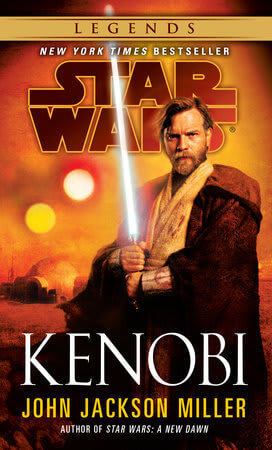 By
John Jackson Miller
Released
Aug 27, 2013
Artwork by
Narrated by
Jonathan Davis
Takes place in
19 BBY
In the
Reign of the Empire
era
Part of the
Legends Stand Alone Novels
Collects
Masterpiece
Incredible
Good
Fair
Mediocre
A rich, heartfelt classic that encapsulates all of the best aspects of the EU.
Community Rating
#
3
in the
Youtini Reading Order

Following Order 66, General Obi Wan Kenobi vanished from the galaxy along with all the other Jedi. Years later, he re-emerged as a crazy old hermit by the name of Ben to play a hand in the fate of the galaxy. However, much more happened in the preceding years than one might expect. Even on a backwater planet like Tatooine, there is conflict, and soon Ben finds himself wrapped up in a decades-long feud between the moisture farmers and their arch nemeses, the Tusken Raiders. Ben must find a way to get to the bottom of an ever-deepening mystery that lies beneath the conflict while also keeping his identity—and his true purpose on Tatooine—a secret.

Kenobi is hands down one of the best books in the Expanded Universe. John Jackson Miller crafted a well-written, easy-to-read piece that not only focuses on one of the most beloved characters in all of Star Wars, but also manages to fill in a crucial gap in the story between movie trilogies. It takes the Western influences in Star Wars and runs with them to create not only an engaging story, but an essential one.

The Republic has fallen.

Tatooine—a harsh desert world where farmers toil in the heat of two suns while trying to protect themselves and their loved ones from the marauding Tusken Raiders. A backwater planet on the edge of civilized space. And an unlikely place to find a Jedi Master in hiding, or an orphaned infant boy on whose tiny shoulders rests the future of a galaxy.

Known to locals only as “Ben,” the bearded and robed offworlder is an enigmatic stranger who keeps to himself, shares nothing of his past, and goes to great pains to remain an outsider. But as tensions escalate between the farmers and a tribe of Sand People led by a ruthless war chief, Ben finds himself drawn into the fight, endangering the very mission that brought him to Tatooine.

Ben—Jedi Master Obi-Wan Kenobi, hero of the Clone Wars, traitor to the Empire, and protector of the galaxy’s last hope—can no more turn his back on evil than he can reject his Jedi training. And when blood is unjustly spilled, innocent lives threatened, and a ruthless opponent unmasked, Ben has no choice but to call on the wisdom of the Jedi—and the formidable power of the Force—in his never-ending fight for justice.

Read Our Full Review

Masterpiece
Incredible
Good
Fair
Mediocre
A rich, heartfelt classic that encapsulates all of the best aspects of the EU.