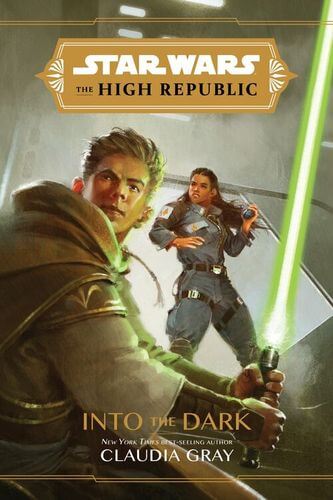 The High Republic: Into the Dark

Publisher's SummaryBooks in this SeriesYoutini ReviewVideo ReviewStaff ReviewsCommunity ReviewsVideosCollections
Jedi Padawan Reath Silas isn’t sure if he’s ready for an adventure. Yet he finds himself boarding a small ship en-route to might-as-well-be-nowhere instead of remaining in the Jedi Archives where he feels most at home. Why? Because his Master said so. He has no other choice. But when the Great Disaster hits, Silas and his newfound companions find themselves on a much more dangerous journey. Dark side energy, questionable plants, and a galaxy thrust into unprecedented chaos await the crew of The Vessel at every turn ... and there's something even darker waiting to strike. Claudia Gray's first High Republic novel is not her first go at a Star Wars story, and it shows. Prepare to meet a cast of characters you'll never want to leave behind and dive into a story full of mystery, high-stakes action, and answers to questions about the Jedi and the Sith that will only leave you with -- you guessed it -- more questions.

Padawan Reath Silas is being sent from the cosmopolitan galactic capital of Coruscant to the undeveloped frontier—and he couldn’t be less happy about it. He’d rather stay at the Jedi Temple, studying the archives. But when the ship he’s traveling on is knocked out of hyperspace in a galactic-wide disaster, Reath finds himself at the center of the action. The Jedi and their traveling companions find refuge on what appears to be an abandoned space station. But then strange things start happening, leading the Jedi to investigate the truth behind the mysterious station, a truth that could end in tragedy….