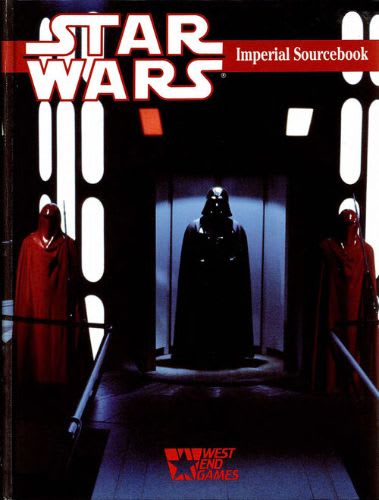 The Imperial Sourcebook, written by Greg Gorden, was released in October 1989 as part of the West End Games Star Wars: The Roleplaying Game. A softbound edition of the sourcebook was released in November 1991, and a second edition was released in June 1994. Includes all the game statistics needed to use the might of the Empire in the roleplaying game. 144-page book features: Illustrations, photographs, maps and diagrams--some never published before! A look at the Imperial power structure since the Battle of Yavin, concentrating on the time period between Star Wars and The Empire Strikes Back. Details on COMPNOR and Imperial Intelligence--the organizations that keep the war machine moving. Descriptions, illustrations and statistics for new capital ships, custom ordnance, and land vehicles. Data on support weapons, special Imperial Units and training techniques, such as the use of drop camps. Information for movie fans and game players alike on one of the most evil institutions ever portrayed in heroic fiction. The massive Order of Battle of a typical sector, detailing the true might of the Galactic Empire.