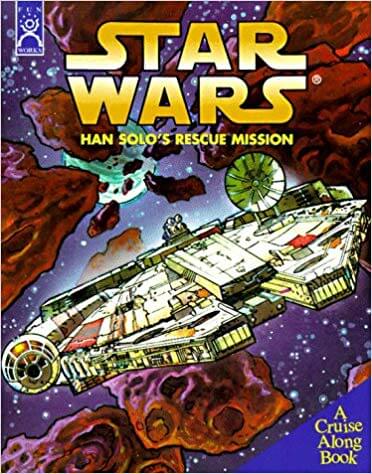 By
John Whitman
Released
Mar 1, 1998
Artwork by
Narrated by
Takes place in
1 ABY
In the
Rebellion
era
Part of the
Collects
Masterpiece
Incredible
Good
Fair
Mediocre
Community Rating
#
in the
Youtini Reading Order

Han Solo's Rescue Mission is a young children's book telling a story about Han Solo rescuing a group of Ithorians. It was written by John Whitman and illustrated by Kilian Plunkett.

As a Cruise Along Book, the book came packaged with a Micro Machines X-Ray Fleet miniature Millennium Falcon.

The Galactic Empire is preparing to attack Ithor. A group of Ithorians are being transported by Han and Chewbacca to Bimmisaari. After rescuing the Ithorians, the Imperial forces arrive and attack Millennium Falcon. Turbolaser bolts damaged the ship's computer and they arrived in an asteroid field. They escaped, but nearly got eaten by three space slugs.