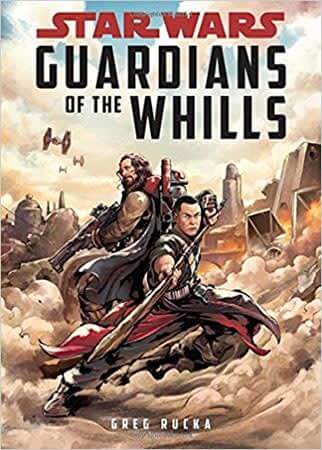 Guardians of the Whills

By
Greg Rucka
Released
May 2, 2017
Artwork by
Narrated by
Takes place in
1 BBY
In the
Age of Rebellion
era
Part of the
Stand Alone Canon Novels
Collects
Masterpiece
Incredible
Good
Fair
Mediocre
Community Rating
#
151
in the
Youtini Reading Order

When Rogue One soared into theaters, fans were introduced to the newest in a line of tremendous Star Wars duos: Baze Malbus and Chirrut Îmwe. From the moment they stepped onscreen, we could tell that the pair would do anything for each other, but all we knew of their past history was a single title: Guardians of the Whills.

This novel gives us a little more of the backstory surrounding Chirrut and Baze as they are faced with the dark consequences that may be necessary in the ultimate fight against the evil of the Empire. Featuring Saw Gerrera and a number of new faces, this Young Adult feature brings us right back into the fold with two of our favorite heroes.

Baze Malbus and Chirrut Îmwe used to be Guardians of the Whills, who looked after the Kyber Temple on Jedha and all those who worshipped there. Then the Empire came and took over the moon. The temple was sealed and the people scattered. Now Baze and Chirrut do what they can to resist the Empire and protect the people of the Holy City, but it never seems to be enough. When a man named Saw Gerrera arrives with grand plans to take down the Empire, it seems like the perfect way for Baze and Chirrut to make a real difference and help the people of Jedha. But will it come at too great a cost?