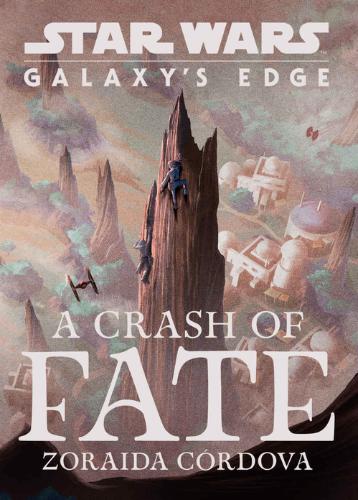 Galaxy’s Edge: A Crash of Fate

Decades apart can alter friendships forever, but sometimes, that absence makes the reunion all the sweeter. A Crash of Fate brings us into the minds and lives of Izzy and Jules as they rekindle their relationship on the streets of Batuu years after the childhood their shared together.

Love, adventure, fear, and excitement swirl effortlessly through this novel as the pair tries to stay one step ahead of those who would wish them harm, and the sanctuary that they seek may be right in each other's harms. A spiritual successor to Lost Stars, A Crash of Fate shows us how the fire of passion can burn just as hot as the engine of a pod racer.

Izzy and Jules were childhood friends, climbing the spires of Batuu, inventing silly games, and dreaming of adventures they would share one day. Then, Izzy’s family left abruptly, without even a chance to say goodbye. Izzy’s life became one of constant motion, traveling from one world to the next, until her parents were killed and she became a low-level smuggler to make ends meet. Jules remained on Batuu, eventually becoming a farmer like his father, but always yearning for something more.

Now, thirteen years after she left, Izzy is returning to Batuu. She’s been hired to deliver a mysterious parcel, and she just wants to finish the job and get gone. But upon arrival at Black Spire Outpost she runs smack into the one person who still means something to her after all this time: Jules.

The attraction between them is immediate, yet despite Jules seeming to be everything she’s ever needed, Izzy hesitates. How can she drag this good-hearted man into the perilous life she’s chosen?

Jules has been trying to figure out his future, but now all he knows for certain is that he wants to be with Izzy. How can he convince her to take a chance on someone who’s never left the safety of his homeworld?

When Izzy’s job goes wrong, the two childhood friends find themselves on the run. And all their secrets will be revealed as they fight to stay alive…