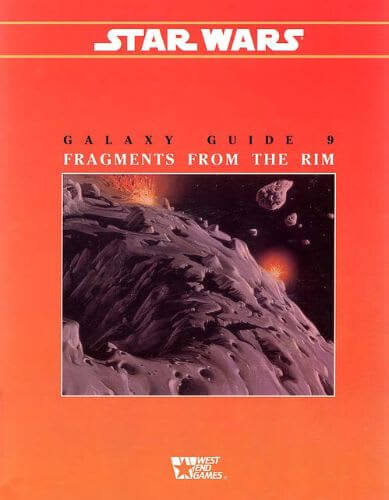 Galaxy Guide 9: Fragments from the Rim

Galaxy Guide 9: Fragments from the Rim is a supplement to Star Wars: The Roleplaying Game published by West End Games. It was written by Simon Smith and Eric Trautmann and was first published in 1993. The book is a collection of trivia, rumors, news, and information arising in the Outer Rim Territories. The descriptions given are set during the Rebellion era. It covers organization and character backgrounds plus some Force training related articles and general atmosphere ideas. It is not an exhaustive documentation of a single topic, but a compilation of ideas to be added to gamemaster-made adventures or to serve as inspiration for one's own creations. Galaxy Guide 9: Fragments from the Rim is set in the time period following the Battle of Yavin, but before the Battle of Endor, during the preliminary development stages of the Empire's second Death Star. A compendium of trivia, news, rumors, and information from the Outer Rim Territories. Inside this Galaxy Guide, there are countless new characters, ships, aliens, and locations to populate your campaign. Meet some of the most famous Rebel heroes, Imperial despots and dangerous pirates and smugglers in this section of the galaxy. This Galaxy Guide provides gamemasters with a wealth of information about life in the Star Wars universe, and includes chapters on the Rebel Alliance and the Empire, swoop gangs, mercenary units, pirates, corporations, media organizations, the Force, and even music, social life and culture! The perfect supplement to add atmosphere and flavor to your Star Wars game.