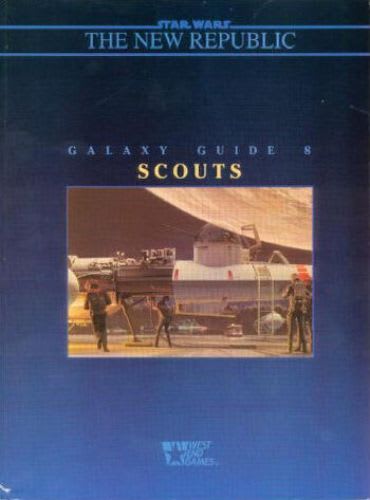 Galaxy Guide 8: Scouts is a supplement to Star Wars: The Roleplaying Game written by Bill Smith and Bill Olmesdahl, and published by West End Games in 1993. This guide was the first of the series dealing with the New Republic era, presenting the New Republic Scout Service as background for player characters interested in the "facing the unknown" theme, more common in other sci-fi universes. Galaxy Guide 8 features a complete lifeform random generation system and includes the planet/system random generation system already seen in Planets of the Galaxy, Volume One. In the days of the Old Republic, exploration was the key to adventure. New worlds lay beyond the next star, and high adventure lived along the spaceways. The scout was a free spirit; an adrenaline jockey eager to plumb the depths of his own curiosity. And then came Imperial Rule and the iron grip of Emperor Palpatine. He, and his Imperial Moffs and governors, turned the scout service to…other purposes. Seeking out Rebel Bases and hunting the heroes of the Alliance, the scouts became dark shadows of themselves—spies and infiltrators under the control of the Imperial Fleet. Now, the New Republic holds sway in most of the "civilized" portions of the old Empire, and the Scout Service has been renewed. Seeking out cultures and worlds lost or abandoned during the dark time of the Empire, the scouts are a new breed of hero facing a new kind of danger…