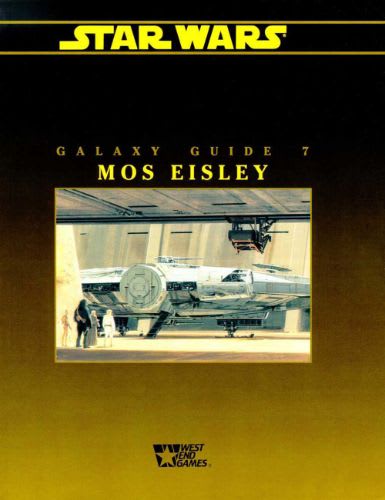 Galaxy Guide 7: Mos Eisley is a sourcebook written by Martin Wixted for Star Wars: The Roleplaying Game, published by West End Games in 1993. Is the first of the Galaxy Guide series originally published after the Second Edition Rulebook. Galaxy Guide 1: A New Hope already portrayed characters seen in Mos Eisley during Star Wars: Episode IV A New Hope, and Tatooine Manhunt gave a first sketch of the city beyond the film. This guide presents a deep view of the city after the events of A New Hope, featuring descriptions and RPG stats for characters, vehicles, and droids. Plus maps of the city, region, and several buildings. Come explore the infamous pirate spaceport city of Mos Eisley. Pounded by the relentless twin suns of Tatooine, Mos Eisley is host to some of the most famous (or infamous) smugglers and criminals in the galaxy! Made famous by the exploits of Han Solo and the treachery of Jabba the Hutt, Mos Eisley is the ultimate adventuring locale for fans of the Star Wars movies. This book provides a complete overview of this outlaw city. It contains detailed location descriptions, with maps, gamemaster character descriptions and illustration. Includes introductory chapters describing the history of Tatooine and Mos Eisley!