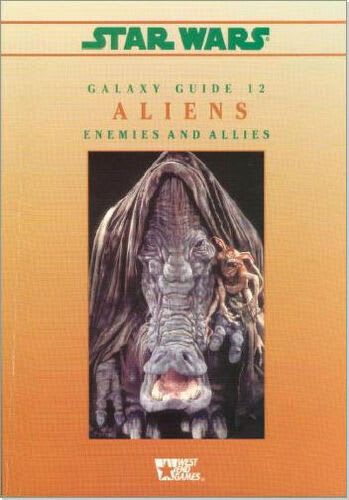 Galaxy Guide 12: Aliens — Enemies and Allies is a supplement to Star Wars: The Roleplaying Game published by West End Games in 1995. It was written by several writers, each of whom wrote on one or more species. In the introductory "flavor text", the book was imagined to be compiled from excerpts from the first draft of The University of Sanbra Guide to Intelligent Life, written by an Iyra sentientologist named Tem Eliss. Professor Eliss was forced to go into hiding from COMPNOR when his book's pro-alien views were discovered by Imperial spies, and the first draft was anonymously leaked to underground communication networks. Much as in West End Games' earlier sourcebook, Galaxy Guide 4: Alien Races, some of the species detailed appeared in the original trilogy, while some were invented for the game. West End Games would follow Alien Races and Aliens — Enemies and Allies with a third book, Alien Encounters. Snaggletooth. Ephant Mon. Weequay. Nikto. Though only glimpsed in the Star Wars movies, their unique appearance—their alienness—makes them some of the most memorable characters from this grand adventure. From the seedy Mos Eisley Cantina to the poshest cruisers plying the Galactic Core, they are an important part of the Star Wars universe. Aliens have civilizations spanning a million worlds, each with its own culture and history. Galaxy Guide 12: Aliens - Enemies and Allies describes over 30 alien species, with illustrations and complete game statistics