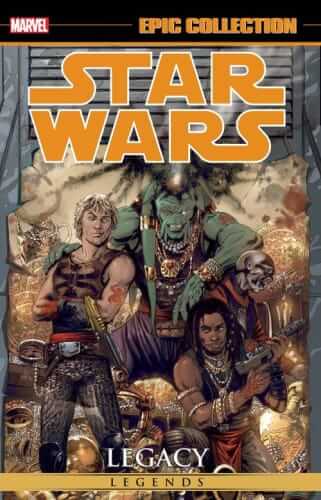 Publisher's SummaryBooks in this SeriesYoutini ReviewVideo ReviewStaff ReviewsCommunity ReviewsVideosCollections
After Darth Krayt had seized control of the galaxy and declared himself Emperor, strife and infighting threatens to collapse his empire from within. But Rogue Squadron and Galactic Alliance forces won’t go down without a fight. Cade Skywalker has a chance encounter with an obscure sect of ancient Jedi, where they are attacked by Fel’s band of Imperial Knights! Plus, a return to the Mon Cal homeworld, the massive Vector crossover event, and so so much Force lightning!

Feel the full fury of the Sith! Continue to explore the legacy of Star Wars, a century in the future! With the Sith Empire and the Galactic Alliance locked in war, Admiral Gar Stazi steers his flagship the Indomitable into all-out space combat! Emperor Krayt sets out to teach the galaxy a lesson in obedience! And bounty hunter Cade Skywalker and his ragtag group settle scores! But when Cade heads to a Hidden Temple, will he find Jedi for a New Age? Master of magic Darth Wyyrlok undertakes his own crucial mission, the Mon Calamari face extinction, and Rogue Squadron encounters Mandalorian mayhem. But when the era-spanning Celeste Morne arrives in the future, will she be the secret weapon that will help Cade take down Emperor Krayt once and for all?