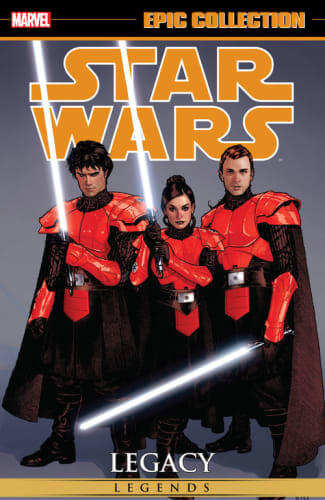 Publisher's SummaryBooks in this SeriesYoutini ReviewVideo ReviewStaff ReviewsCommunity ReviewsVideosCollections
Set 100 years after the events of the Original Trilogy, the galaxy looks quite different. A benevolent ruler, Emperor Roan Fel, maintains order and peace with his lightsaber-wielding Imperial Knights. An Ancient Sith threat strikes from obscurity, taking out Jedi Master Col Skywalker and threatening Fel’s reign. The last hope of the galaxy is Cade Skywalker, strung out street rat, who has rejected his family lineage and taken up a less respectable path. From legendary comics duo John Ostrander and Jan Dursema, Legacy is a bold, original, and imaginative rein visioning of the characters and themes of Star Wars and is one of the most successful stories in Legends.

Head far into the future of long ago, in a series that explores the state of the galaxy more than 100 years after Star Wars: Episode VI Return of the Jedi. A new evil has arisen, shattering a resurgent Empire and seeking to put an end to the Jedi once and for all. The Sith Lord Darth Krayt sits on the throne. Only one hope remains – the last remaining heir to the Skywalker legacy. Cade may be strong in the Force but, years after a tragedy, he is a bounty hunter, working with Jariah Syn and Deliah Blue. When he reluctantly finds himself at the center of galactic turmoil, Cade may be forced to embrace his heritage. But will the path he embarks on be one of redemption, or damnation?