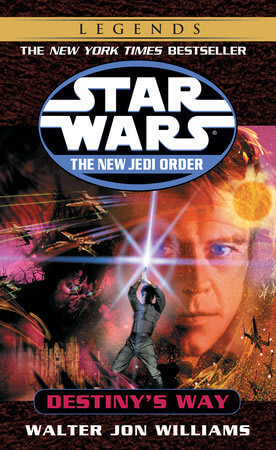 Publisher's SummaryBooks in this SeriesYoutini ReviewVideo ReviewStaff ReviewsCommunity ReviewsVideosCollections
One of the five original hardcover tentpole books of the New Jedi Order, Destiny's Way is a pivotal book in the grand scheme of galactic politics. A new government is forming to better handle the galactic shakeup that has come at the hands of the Yuuzhan Vong. Luke Skywalker positions the Jedi to be major players in galactic events and inducts a new class of Jedi Knights into a now fully-formed Jedi Order. But disparate factions within the government propose various solutions to the Yuuzhan Vong problem—including biological warfare that would exterminate the Vong in their entirety.

The time of reckoning is close at hand, as the heroes of the New Republic prepare for their most volatile clash yet with the enemy—from without and within….

In the war against the ruthless Yuuzhan Vong, the fall of Coruscant leaves the galaxy on the verge of bowing to conquest. Those who steadfastly refuse to surrender—Luke, Han, Leia, and their children and comrades-in-arms—are determined to seize victory against overwhelming odds. But the New Republic is crumbling, divided by internal strife, and intrigue runs rampant: in the heated political race for Chief of State…in the shadows where Yuuzhan Vong spies plot assassinations…and in the inscrutable creature Vergere, a Jedi whose allegiance is impossible to predict.

Now, as Luke Skywalker sets about reestablishing the Jedi Council, the growing faction opposed to the ways of the Force unveils a terrifying weapon designed to annihilate the Yuuzhan Vong species. The opposition must be stopped, before dooming the New Republic to becoming the very thing it has sworn to fight against—and unleashing the power of the dark side.