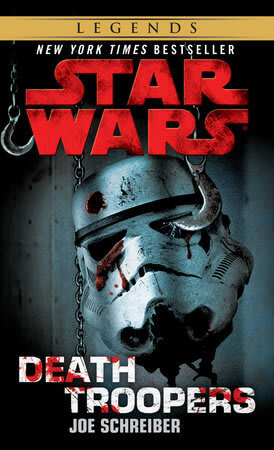 In Death Troopers, readers follow the story of two young brothers dealing with the daily horrors of being captive aboard a prison barge. However, even worse horrors await them once everyone on the ship begins to inexplicably fall sick and die…and then come back to life. The brothers must band together with whoever they can find if they want to escape from the prison and its new flesh-eating passengers.

Joe Schreiber managed to tell a Star Wars story unlike any other with Death Troopers. He delivers the perfect mix of horror and science fiction for any Star Wars fan who’s really in the Halloween spirit. Readers beware: this one has plenty of blood and guts.

When the Imperial prison barge Purge—temporary home to five hundred of the galaxy's most ruthless killers, rebels, scoundrels and thieves—breaks down in a distant, uninhabited part of space, its only hope seems to lie with a Star Destroyer found drifting, derelict, and seemingly abandoned. But when a boarding party is sent to scavenge for parts, only half of them come back—bringing with them a horrific disease so lethal that within hours, nearly all aboard the Purge will die in ways too hideous to imagine.

And death is only the beginning.

The Purge's half-dozen survivors—two teenage brothers, a sadistic captain of the guards, a couple of rogue smugglers and the chief medical officer, the lone woman on board—will do whatever it takes to stay alive. But nothing can prepare them for what lies waiting onboard the Star Destroyer amid its vast creaking emptiness that isn't really empty at all.wrong The dead are rising, soulless, unstoppable, and unspeakably hungry.

Heather Goldman
Community Department Manager
I didn’t know that a Star Wars horror story was possible until I read Death Troopers. This novel is a classic zombie story with a special Star Wars touch, and the two elements actually pair together fairly well. Expect loads of uncensored gore and thrills. It’s interesting to note that this book was released around the same time as the Brain Invaders arc for The Clone Wars which relayed a similar story involving undead creatures.

Charles Hanckel
Vice President, Podcast Department Coordinator, Podcast Host
Death Troopers is exactly what you think it is: a Star Wars and zombie horror story mash-up. While that sound odd (and, to be clear, it is), the book is every bit as gruesome and disgusting as you would expect. To be entirely honest, it's a fun read around Halloween when you're in the spirit, but could otherwise be skipped.

Jared Mayes
Legends Lookback Lead Host
I’ll never forget the first time I read Death Troopers. It’s a perfect balance of Star Wars and horror. It was an original leap for Del Rey to do something so different, and I found it a really morbidly refreshing Star Wars book. In A New Hope, Han mentions that he’s been from one side of the galaxy to the other and he’s seen a lot of strange stuff. This book is that strange stuff. This book probably isn’t for everyone, but I typically don’t mess with horror and loved it.
See More