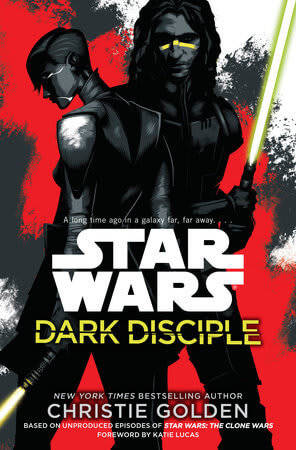 By
Christie Golden
Released
Jul 7, 2015
Artwork by
Narrated by
Marc Thompson
Takes place in
19 BBY
In the
Fall of the Jedi
era
Part of the
Stand Alone Canon Novels
Collects
Masterpiece
Incredible
Good
Fair
Mediocre
Whoever says the Dark Side and assassinations aren't romantic obviously haven't read this book.
Community Rating
#
14
in the
Youtini Reading Order

Asajj Ventress did not deserve the pain she endured as a child, but she endured it all the same. While most know her as the relentless, hardened Sith apprentice who will stop at nothing to please her master, there’s a much less sinister side to her -- one that may even be capable of falling in love.

There were many stories originally meant to complete The Clone Wars that never got their chance to be told. But Ventress’s journey deserved a proper ending, and it got exactly that. In this story of love, loss, and triumph, watch as the villain you thought you knew transforms into a celebrated hero of the Republic.

The only way to bring down the Sith’s most dangerous warrior may be to join forces with the dark side.

In the war for control of the galaxy between the armies of the dark side and the Republic, former Jedi Master turned ruthless Sith Lord Count Dooku has grown ever more brutal in his tactics. Despite the powers of the Jedi and the military prowess of their clone army, the sheer number of fatalities is taking a terrible toll. And when Dooku orders the massacre of a flotilla of helpless refugees, the Jedi Council feels it has no choice but to take drastic action: targeting the man responsible for so many war atrocities, Count Dooku himself.

But the ever-elusive Dooku is dangerous prey for even the most skilled hunter. So the Council makes the bold decision to bring both sides of the Force’s power to bear—pairing brash Jedi Knight Quinlan Vos with infamous one-time Sith acolyte Asajj Ventress. Though Jedi distrust for the cunning killer who once served at Dooku’s side still runs deep, Ventress’s hatred for her former master runs deeper. She’s more than willing to lend her copious talents as a bounty hunter—and assassin—to Vos’s quest.

Together, Ventress and Vos are the best hope for eliminating Dooku—as long as the emerging feelings between them don’t compromise their mission. But Ventress is determined to have her retribution and at last let go of her dark Sith past. Balancing the complicated emotions she feels for Vos with the fury of her warrior’s spirit, she resolves to claim victory on all fronts—a vow that will be mercilessly tested by her deadly enemy . . . and her own doubt.

Eric Eilersen
President
I'm a sucker for romance books about the nature of morality that are littered with assassination attempts and betrayal...and this book scratches that itch perfectly. The Clone Wars introduced us to the phenomenal characterization of Asajj Ventress, and Christie Golden absolutely soars with her within the pages of this book. When she is forced to team up with Jedi Master Quinlan Vos to assassinate Count Dooku using techniques that dip into the seductive pool of the dark side, one of the best stories of the modern Canon follows.

Andrew Bell
Video Department Coordinator
So many things to say about this book yet I don't know where to start. This is one that I put off reading for a while until I was able to finish watching The Clone Wars (which I would recommend). By the time I did get to it, certain plot points had been spoiled for me. Despite thinking that I knew where the story was going, though, I still found myself completely blindsided in the best way possible. I'll limit the rest of my commentary to a single, melodramatic comparison. Dark Disciple is like a heavy rainstorm. It's not always comfortable while you're in it, but it's powerful and beautiful in its own way.

Meg Dowell
Editor-in-Chief
Asajj Ventress's story never got the true conclusion it deserved after The Clone Wars ended. Dark Disciple, however, completed her arc and provided a beautiful dose of closure for fans of the show. Since reading this book, Ventress has become one of my favorite villains. We get to see her grow, struggle, and in the end, become a hero. Whether you're a fan of The Clone Wars TV series or not, you'll love getting to know the once cold-hearted assassin as someone definitely worth remembering.
See More