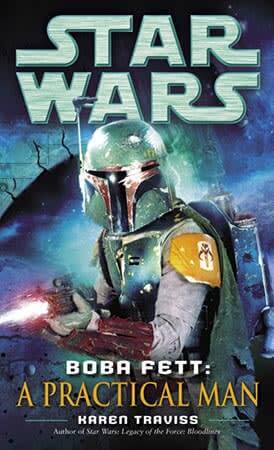 Publisher's SummaryBooks in this SeriesYoutini ReviewVideo ReviewStaff ReviewsCommunity ReviewsVideosCollections
Set just prior to the Yuuzhan Vong war, this short story fills in the gaps that lead Boba Fett to lead the Mandalorians against the Vong. Although Mandalorians historically have not been on the same side with the Jedi, this war brings them together. This short story fits into Karen Traviss’s Legends-continuity development of the Mandalorian society and culture.

On the surface, it seems like just another routine contract for Boba Fett and his Mandalorian commandos, but the mystery client who hires them to start a small war is more dangerous than any of them can possibly imagine. When the Yuuzhan Vong invasion force sweeps into the galaxy, the Mandalorians find they’re on the wrong side–fighting for an alien culture that will bring about the end of their own.

Now Fett has to choose between his honor and the survival of his people. Since he’ s a practical man, he’s determined help the resistance beat the Yuuzhan Vong—even if it means working with a Jedi agent. Trouble is, no one trusts a man with Fett’ s reputation. So convincing the New Republic that they’re fighting on the same side is a tall order. Denounced as traitors, Fett’s Mandalorians need to stay one step ahead of their Yuuzhan Vong paymasters–and the Republic who sees them as collaborators with the most destructive enemy the galaxy has ever faced. . . .