Before the Storm is the first novel in the Black Fleet Crisis trilogy. The trilogy is unique in its focus on military campaigns, as it describes in detail the political and military threats to the New Republic. Before the Storm establishes the brewing conflict with xenophobic threat from the far reaches of the galaxy, as Leia attempts to allay the threat. Meanwhile, Luke Skywalker sets out on a mission to discover the truth about his mother and her origins, leading him to her home planet.

Before the Storm is a great read for fans of more military-focused novels. It is an excellent look into the politics and workings of the New Republic. Of course, it is also an important book for fans of Luke, as it details an important quest to learn more about his origins.

It is a time of tranquillity for the New Republic. The remnants of the Empire now lie in complete disarray, and the reemergence of the Jedi Knights has brought power and prestige to the fledgling government on Coruscant. Yesterday's Rebels have become today's administrators and diplomats, and the factions that fought against imperial tyranny seem united in savoring the fruits of peace.

But the peace is short-lived. A restless Luke must journey to his mother's homeworld in a desperate and dangerous quest to find her people. An adventurous Lando must seize a mysterious spacecraft that has weapons of enormous destructive power and an unknown mission. And Leia, a living symbol of the New Republic's triumph, must face down a ruthless leader of the Duskhan League, an arrogant Yevetha who seems bent on a genocidal war that could shatter the fragile unity of the New Republic...and threaten its very survival. 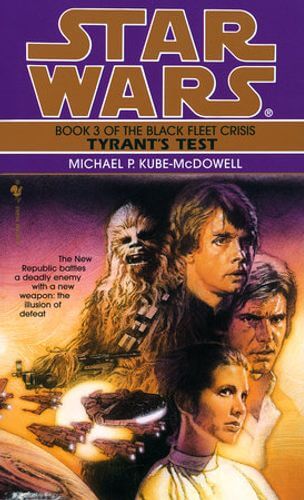