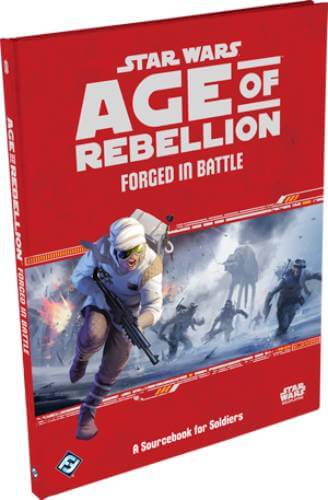 Age of Rebellion: Forged in Battle

Forged in Battle is a sourcebook for Fantasy Flight Games' Star Wars: Age of Rebellion roleplaying game offering new rules, locations, gear, and adventure scenarios for the Soldier class. The Alliance to Restore the Republic rests on high-minded ideals, but its battles must still be won in the trenches. The Rebellion's troops go into every battle outnumbered and outgunned. Its soldiers know that they're fighting a war against long odds, but they remain undaunted. Instead, they rally together, using their cunning, their skill, and their courage to ensure that the hope for freedom persists in the galaxy. A Soldier sourcebook for the Star Wars®: Age of Rebellion™ Roleplaying Game, Forged in Battle offers these brave warriors a wealth of new options and resources with which they can better take the fight to the Empire. Its 96 full-color pages introduce new species, specializations, and signature abilities. A sizable collection of new weapons, armor, gear, and vehicles adds more firepower to your campaign, and Game Masters will find helpful hints on running combats in different terrain, using the changes in environment to better suit the tastes of your Soldiers, as well as all other characters interested in standing on the front lines.