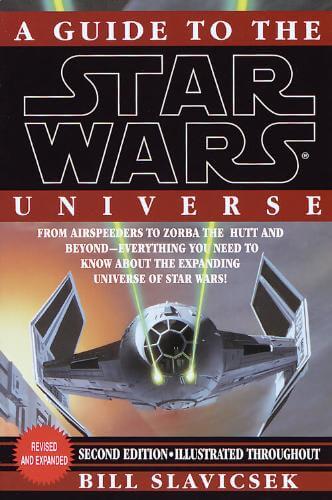 A Guide to the Star Wars Universe, Second Edition compiled

By
Bill Slavicsek
Released
Mar 8, 1994
Artwork by
Ralph McQuarrie
Narrated by
Takes place in
In the
era
Part of the
Collects
Masterpiece
Incredible
Good
Fair
Mediocre
Community Rating
#
in the
Youtini Reading Order

A Guide to the Star Wars Universe, Second Edition, Revised and Expanded is a reference book written by Bill Slavicsek and published in 1994. It was a revised and expanded version of the earlier first edition and was later followed by a third edition. The book alphabetically details people, places, things, and events in the Star Wars universe. Most of the entries are quite short, the longest being a little over two pages. Each entry is divided into G-canon and Expanded Universe information, and has sources cited. The second edition also included a brief timeline, and a comparison of sublight speeds in starfighters. Who or what was Salacious Crumb? When were Spaarti cloning cylinders developed, and why did it take a year to grow a healthy clone? What is stored within the ancient artifact called the Jedi Holocron? Who owned the Millenium [sic] Falcon before Han Solo, and how did it change hands? What is otherspace? What was Grand Admiral Thrawn's objective in the battle of Sluis Van? Looking for facts about the characters, armament, starships, planets, alien species, or battles in the most exciting adventure of them all? You'll find the whole universe of Star Wars covered here: The original Star Wars movies Novels – from Star Wars to The Last Command TV movies and specials The animated TV series "Droids" and "Ewoks" National Public Radio dramatizations Young Adult novels The Dark Empire comic books Role-playing games …plus sourcebooks, storybooks, sketchbooks, portfolios, and more!