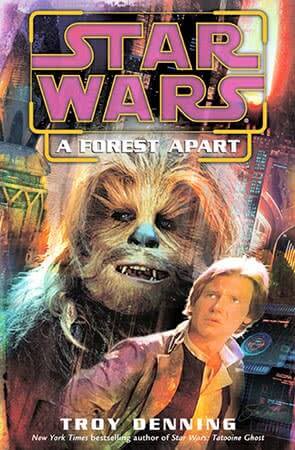 While on a trip to Coruscant, Chewbacca’s son, Lumpawarump (AKA Lumpy), catches a thief attempting to steal sensitive data from the New Republic. Like his father, he hurries to intervene, but is quickly captured and taken away to one of Palpatine’s old undercity detention centers. Chewbacca and Mallatobuck must lead a rescue mission to free their son and recapture the stolen data.

Troy Denning once again showcases Chewbacca’s level of dedication to his family, but also reveals the lengths to which any Wookie is willing to go to when one of their own is threatened.

Growing up in the shadow of his heroic father, Lumpawarrump, son of Chewbacca, feels tremendous pressure to match his father’s daring exploits. Chewie’s life-debt to Han Solo keeps him from returning home, and without the steadying influence of his father, Lumpy is unfocused and out of control. So Chewie’s wife decides that a visit to Coruscant is in order. It’s the perfect opportunity for the family to bond—and for Chewbacca to teach his son some much-needed life-lessons.

But when Lumpy’s eagerness to impress his father leads to direct disobedience, Chewie is forced into an extreme pursuit that will lead him into Coruscant’s dangerous underlevels–and to a secret as shocking as it is deadly. . . .