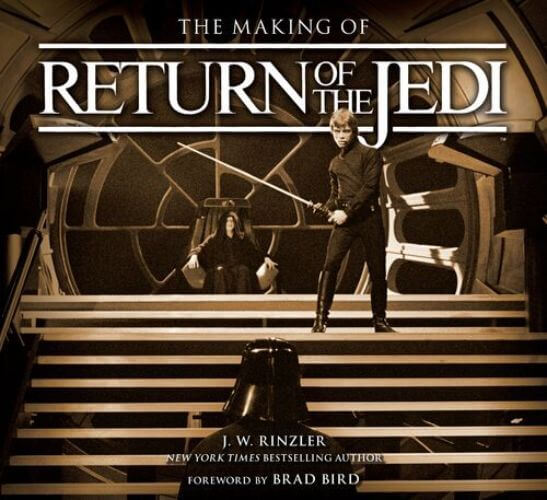 The Making of Return of the Jedi

The Making of Return of the Jedi is a book written by J.W. Rinzler about the production of Star Wars: Episode VI Return of the Jedi, including a foreword by Brad Bird. It was published by Del Rey on October 1, 2013. On October 22, 2013, it was released in enhanced eBook edition, with bonus artwork and photos that did not appear in the print edition. Just as Star Wars: Episode VI Return of the Jedi completed the most successful cinematic trilogy of its generation, perhaps of all time, this splendid thirtieth-anniversary tribute completes New York Times bestselling author J. W. Rinzler's trio of fascinating behind-the-scenes books celebrating George Lucas's classic films. Once again, the author's unprecedented access to the formidable Lucasfilm Archives has yielded a mother lode of extremely informative, vastly entertaining, and often unexpected stories, anecdotes, recollections, and revelations straight from the closely guarded set of a big-screen blockbuster in the making. Brimming with previously unpublished photos, production artwork, script excerpts, exclusive intel, vintage on-set interviews, and present-day commentary, The Making of Star Wars: Return of the Jedi chronicles "how George Lucas and his crew of extroverted artists, misfits, and expert craftspeople roused themselves to great heights for a third time" to create the next unforgettable chapter in one of the most beloved sagas of all time. Get up close to the action and feel like a studio insider as creator George Lucas, Oscar-nominated screenwriter Lawrence Kasdan, and director Richard Marquand huddle in a script conference to debate the destinies of iconic Star Wars characters, as well as plot twists and turns for the epic final showdown between the Rebel Alliance and the Empire artists and craftspeople at the groundbreaking Industrial Light & Magic facility top their own revolutionary innovations—despite the infamous Black Friday—with boundary-pushing new analog visual effects a crack team of sculptors, puppeteers, actors, and "monster-makers" bring Jabba the Hutt and his cohorts to startling, slobbering life from the inside out a Who's Who of heavyweight directors—from such films as Superman, Gremlins, Halloween, Dune, Scanners, and Time Bandits—are considered for the coveted job of bringing a new Star Wars adventure to the silver screen actors and crew race to the finish line at Elstree Studios, in a fiery desert, and beneath the trees of a dense redwood forest—before money runs out—to answer the questions that audiences had waited three years to find out: Is Darth Vader really Luke's father, who is the "other"—and who or what is the Emperor? Star Wars' stars from both sides of the camera—including Mark Hamill, Harrison Ford, Carrie Fisher, Anthony Daniels, Peter Mayhew, David Prowse, Alec Guinness, director Richard Marquand, producer Howard Kazanjian, Ralph McQuarrie, Joe Johnston, Dennis Muren, Phil Tippett, and mastermind George Lucas—weigh in with candid insights on everything from technical challenges, character design, Ewoks, the Empire's galactic city planet, and the ultimate challenge of bringing the phenomenal space fantasy to a dramatic close. The Making of Star Wars: Return of the Jedi gives a spectacular subject its just due, with more than five hundred images and many, many new interviews