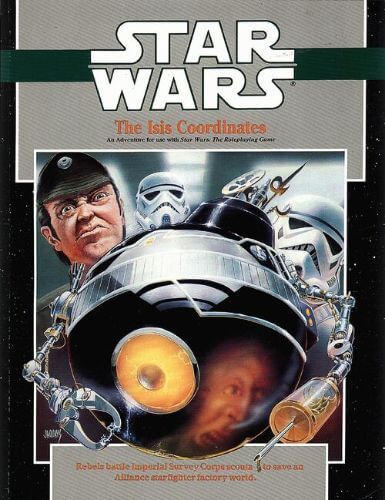 The Isis Coordinates is a 1990 roleplaying adventure for use with Star Wars: The Roleplaying Game, published by West End Games. It was written by Christopher Kubasik, the author of several Star Wars guidebooks from the same publishing company. The adventure allows players to defend the secret of a Rebel safe world. An Imperial Survey Corps vessel emerges from hyperspace above an uncharted planet. The survey team begins its sensor sweeps. The lifeforms indicator crackles to life. Habitations are scanned ... a spaceport ... power generators ... landspeeders ... an X-wing fighter ... Rebels! The survey team has stumbled upon a densely-populated Alliance factory world. If they live to reach an Imperial base and report their findings, hundreds of thousands of lives are at peril, and the Alliance will lose over 30 percent of its starfighter manufacturing capacity. Only two things stand between the Imperials and their base - half a galaxy of hyperspace, and a small band of Rebel heroes. OPENING CRAWL: The Isis Coordinates In its struggle against the EVIL GALACTIC EMPIRE, the Rebel Alliance has established many colonies on worlds far from the galactic core, worlds which remains hidden from the Emperor's ever-probing eyes. As long as their location is kept secret, these worlds serve as naval bases and dockyards for the Rebel fleet as well as safe homes for Rebel agents and their families. There is a branch of the Imperial bureaucracy which directly threatens the existence of these hidden Rebel worlds. The Imperial Survey Corps (ISC) is charged with the task of traveling the galaxy and cataloging uncharted star systems. Usually these new star systems are devoid of life. Other times they contain civilizations ripe to be taxed and oppressed by the Evil Empire. As yet, no Imperial scout team has stumbled across a system containing an Alliance colony. But since the ISC explores and catalogues a new world every 207 minutes, it is only a matter of time before a valuable Rebel colony is discovered by agents of the Empire …