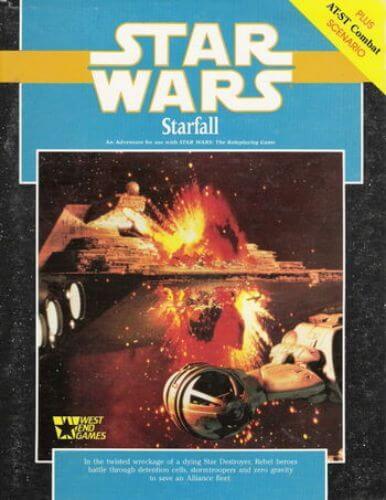 Starfall is an adventure for Star Wars: The Roleplaying Game written by Rob Jenkins and Michael Stern. It was published by West End Games in 1989. It was later re-published in Classic Adventures: Volume Five by West End Games in 1998. Nine hundred meters of twisted, battle-torn Star Destroyer stand between imprisoned Rebel heroes and freedom in this disaster-filled Star Wars adventure. Captured by Imperials, a small group of Rebel heroes find themselves trapped within the detention block of a Victory-class Star Destroyer. Suddenly explosions rock the giant battleship as the Imperial vessel is attacked by an Alliance fleet. When the smoke clears, the Rebel objective is obvious -- escape by any means possible! But the attack has left the Star Destroyer a battered wreck, its crew scattered and its power fading. What dangers await the Rebels deep within the smoldering ruins of this once-great vessel? What Imperial devices remain to prevent their exit? Only those with courage and conviction will attempt to find out. Only those with strength and luck can hope to survive. 40-page booklet features: An action-packed script with parts for every player that quickly starts the disaster-filled adventure. A full-color, poster-sized map of the Victory-class Star Destroyer Subjugator. Details about Victory-class Star Destroyers and how to run an adventure within their massive interiors. A pullout section full of non-player character templates and additional, fully-detailed maps. Also includes: An AT-ST combat scenario including a map suitable for Star Wars Miniatures sets, counters, and complete set-up rules. Large amounts of gamemaster notes and guidelines to help run this exciting, fast-paced adventure.