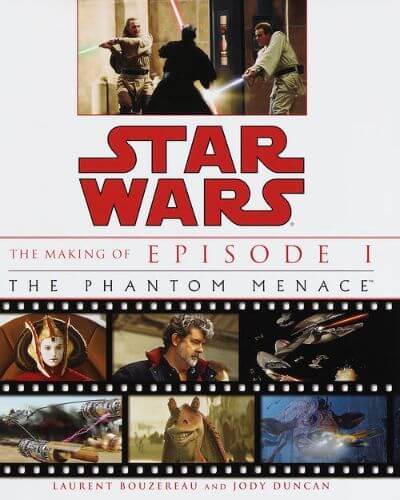 Star Wars: The Making of Episode I The Phantom Menace

By
Laurent Bouzereau and Jody Duncan
Released
May 1, 1999
Artwork by
Narrated by
Takes place in
In the
era
Part of the
Collects
Masterpiece
Incredible
Good
Fair
Mediocre
Community Rating
#
in the
Youtini Reading Order

Star Wars: The Making of Episode I The Phantom Menace is a reference book co-authored by Laurent Bouzereau and Jody Duncan. It was published by Del Rey for the United States and by Random House for the United Kingdom in May 1999. Ebury Press also released a Limited First Edition paperback and a Special Collector's Limited Edition hardcover for the UK. The Ultimate Behind-the-Scenes Tour de Force In 1977, George Lucas brought Star Wars to the big screen—and made cinema history. Now, more than twenty years later, the visionary writer-director, his brilliant crew of special-effects wizards, and an exciting cast of talented stars have united to make the long-awaited and eagerly anticipated Episode I of the Star Wars epic. Star Wars: The Making of Episode I is your exclusive entrée backstage where the wonders of the newest chapter in the Star Wars saga are brought to life, including A series of exclusive interviews with George Lucas as he discusses the genesis of the Star Wars story, from themes to scenes to dialogue The development of such classic characters as young Jedi student Obi-Wan Kenobi and R2-D2—plus intriguing newcomers Anakin Skywalker, Qui-Gon Jinn, Queen Amidala, and Jar Jar Binks The creation of new state-of-the-art creatures and special effects by the legendary Industrial Light & Magic team Pre-production: from storyboarding, set-building, and model-making to costume design and the casting of pivotal roles Post-production: Including editing, scoring, and combining computer generated effects with live-action footage Shooting in England, Italy, and Tunisia, with stars Liam Neeson, Ewan McGregor, and Natalie Portman Hundreds of drawings and photographs Witness all the movie-making magic behind the sensational Star Wars saga's newest episode!