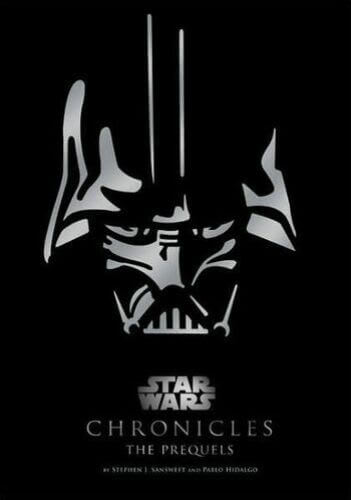 Star Wars Chronicles: The Prequels is a 343-page reference book including over 3,000 color photographs, behind-the-scenes production stills, early sketches, computer renderings, outtakes, and many other things from the archives that show every detail of the prequel trilogy. The book follows in the tradition of its predecessor, Star Wars: Chronicles, in content and length. It was written by Stephen J. Sansweet and Pablo Hidalgo. Sansweet takes advantage of his unique position as Director of Content Management and Head of Fan Relations at Lucasfilm to offer an in-depth tome for the prequels. The book features a black, die-cut slipcase outlining Darth Vader's helmet which encloses the face of a young Anakin Skywalker on the book's silver, inside cover. Packed with breathtaking art and imagery culled from Lucasfilm's massive archives, Star Wars Chronicles: The Prequels explains and deconstructs every vehicle, character, location, and weapon in the films, virtually frame-by-frame. With its companion volume, Star Wars Chronicles, this detailed and extraordinary book is a virtual tour de force of the Star Wars universe. More than 3,000 full-color photos, behind-the-scenes production stills, early sketches, computer renderings, deleted scenes, comparative size charts, and revealing text feature The Phantom Menace, Attack of the Clones, Revenge of the Sith, and Star Wars: Clone Wars animated series.