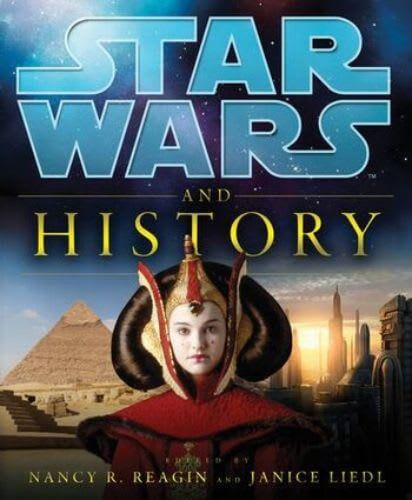 By
Nancy Reagin and Janice Liedl
Released
Nov 13, 2012
Artwork by
Narrated by
Takes place in
In the
era
Part of the
Collects
Masterpiece
Incredible
Good
Fair
Mediocre
Community Rating
#
in the
Youtini Reading Order

Star Wars and History is a book detailing the historical events that inspired the Star Wars saga. It was released on November 20, 2012. At last—an analysis of the historical patterns that influenced the creation and storyline of the Star Wars saga Star Wars took place long ago in a galaxy far, far away, but its epic stories are based on our own history. From Ancient Egypt and the Roman Empire to the French Revolution and the Vietnam War, Star Wars and History explores the major historical turning points, heroes, and villains in human history and their impact on the creation of the Star Wars saga. Star Wars and History shows how the atomic and hydrogen bombs led to the Death Star; how Princess Leia's leadership in the Rebel Alliance resembled the daring work of intrepid women in the French Resistance during World War II and the Mexican Revolution; historical parallels between the Jedi Code and Bushido as well as those linking the Jedi culture with that of the Templar Knights and other warrior monks; and all of the history that underlies the Star Wars galaxy. Read how our own civilization's civil wars, slavery, international corporation states, and teenage queens were transformed into the epic Star Wars history and discover how Tatooine reflects the lawless frontiers of the past and Coruscant our own history of glittering and greedy capitals. The first book devoted to analyzing the actual historical events in our past that influenced the creation of the space fantasy, Star Wars Features 11 essays by a wise "council" of history scholars, written in close collaboration with George Lucas and Lucasfilm Gives new insights into central Star Wars characters and historical figures who helped inspire them (including Luke Skywalker, Princess Leia, Han Solo, Darth Vader, Obi-Wan Kenobi, Queen Amidala, Yoda, Jabba the Hutt, Lando Calrissian, Emperor Palpatine, and others) Includes both stunning photos from the Lucasfilm Image Archives and historical photos that demonstrate the parallels between both worlds Filled with fascinating historical comparisons and background that will take your experience of the Star Wars saga to a new level, Star Wars and History is an essential companion for every Star Wars fan.