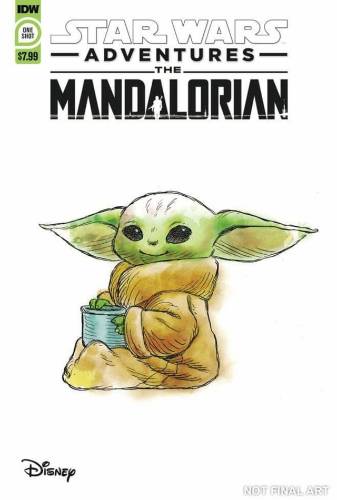 By
Released
Nov 30, 2020
Artwork by
Narrated by
Takes place in
9 ABY
In the
New Republic
era
Part of the
Collects
Masterpiece
Incredible
Good
Fair
Mediocre
Community Rating
#
in the
Youtini Reading Order

Star Wars Adventures: The Mandalorian is a one-shot comic book inspired by the Disney+ series The Mandalorian. The comic was scheduled for publication by IDW Publishing in November 2020, but was never released.

The comic was announced on June 30, 2020, on StarWars.com, alongside several other titles in The Mandalorian publishing program, including a title by Marvel Comics.

In August 2020, the comic was solicited for release in November 2020, and a preliminary cover was revealed. Several days later, artist Peach Momoko confirmed that she would be illustrating the final cover for the comic, but that she had not drawn the preliminary cover.

The comic ultimately was not released in November 2020, and no further information about a possible future release has been provided. On March 9, 2021, several other titles in The Mandalorian publishing program were canceled, including The Mandalorian: An Original Novel, but the comic one-shot has never been officially canceled