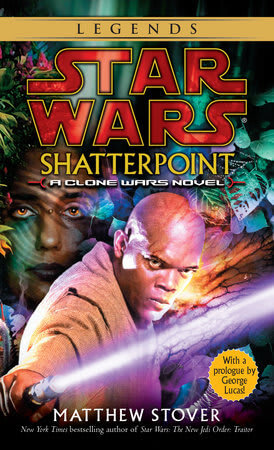 Mace Windu hails from the jungle planet of Haruun Kal, even though his true home is now with the Jedi. However, when Haruun Kal becomes another war-torn world in the galactic struggle, the Council decides to send his former Padawan, Depa Billaba, to help train the natives to fight back against the Separatist invasion. When Billaba disappears, leaving only a mysterious recording behind, Mace must return to his old home, face his past, and do all he can to save the future of his old Padawan.

Matthew Stover delivers a thrilling story that not only gives the fan-favorite character of Mace Windu the spotlight, but also introduces “shatterpoint,” or the ability to sense when significant events are occurring through the Force.

Mace Windu is a living legend: Jedi Master, senior member of the Jedi Council, skilled diplomat, devastating fighter. Some say he is the deadliest man alive. But he is a man of peace—and for the first time in a thousand years, the galaxy is at war.

Now, following the momentous events climaxing in the Battle of Geonosis, Master Mace Windu must undertake a perilous homecoming to his native world—to defuse a potentially catastrophic crisis for the Republic . . . and to confront a terrifying mystery with dire personal consequences.

The jungle planet of Haruun Kal, the homeworld Mace barely remembers, has become a battleground in the increasing hostilities between the Republic and the renegade Separatist movement. The Jedi Council has sent Depa Billaba—Mace’s former Padawan and fellow Council member—to Haruun Kal to train the local tribesmen as a guerrilla resistance force, to fight against the Separatists who control the planet and its strategic star system with their droid armies. But now the Separatists have pulled back, and Depa has not returned. The only clue to her disappearance is a cryptic recording left at the scene of a brutal massacre: a recording that hints of madness and murder, and the darkness in the jungle . . . a recording in Depa’s own voice.

Jedi were never intended to be soldiers. But now they have no choice. Mace must journey alone into the most treacherous jungle in the galaxy—and into his own heritage. He will leave behind the Republic he serves, the civilization he believes in, everything but his passion for peace and his devotion to his former Padawan. And he will learn the terrible price that must be paid, when keepers of the peace are forced to make war. . . .