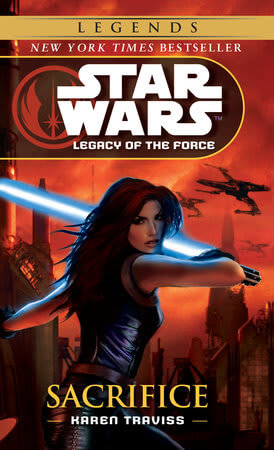 By
Karen Traviss
Released
May 29, 2007
Artwork by
Narrated by
Marc Thompson
Takes place in
40 ABY
In the
Legacy
era
Part of the
Legacy of the Force Series
Collects
Very Good
8.6
8.6
8.6
Community Rating
#
112
in the
Youtini Reading Order

Publisher's SummaryBooks in this SeriesYoutini ReviewVideo ReviewStaff ReviewsCommunity ReviewsVideosCollections
In order for Jacen Solo to complete his transformation into a Sith Lord, he must make a drastic sacrifice. His former Jedi Master, Mara Jade Skywalker, investigates his turn to the dark side. Jacen continues his negative influence over Ben Skywalker by tasking him with an assassination. Karen Traviss picks up plot threads from her Republic Commando series by sending Boba Fett on a quest for a cure for complications with his compromised clone body. He teams up with Null ARC Jaing Skirata and Darman's son Venku.

Civil war rages as the Galactic Alliance–led by Cal Omas and the Jedi forces of Luke Skywalker–battles a confederation of breakaway planets that rally to the side of rebellious Corellia. Suspected of involvement in an assassination plot against Queen Mother Tenel Ka of the Hapes Consortium, Han and Leia Solo are on the run, hunted by none other than their own son, Jacen, whose increasingly authoritarian tactics as head of GA security have led Luke and Mara Skywalker to fear that their nephew may be treading perilously close to the dark side.

But as his family sees in Jacen the chilling legacy of his Sith grandfather, Darth Vader, many of the frontline troops adore him, and countless citizens see him as a savior. The galaxy has been torn apart by too many wars. All Jacen wants is safety and stability for all–and he’s prepared to do whatever it takes to achieve that goal.

To end the bloodshed and suffering, what sacrifice would be too great? That is the question tormenting Jacen. Already he has sacrificed much, embracing the pitiless teachings of Lumiya, the Dark Lady of the Sith, who has taught him that a strong will and noble purpose can hold the evil excesses of the dark side at bay, bringing peace and order to the galaxy–but at a price.

For there is one final test that Jacen must pass before he can gain the awesome power of a true Sith Lord: He must bring about the death of someone he values dearly. What troubles Jacen isn’t whether he has the strength to commit murder. He has steeled himself for that, and worse if necessary. No, the question that troubles Jacen is who the sacrifice should be. As the strands of destiny draw ever more tightly together in a galaxy-spanning web, the shocking answer will shatter two families . . . and cast a grim shadow over the future.

View the entire
Legacy of the Force Series

Jared Mayes
Legends Lookback Lead Host
Sacrifice is a solid entry in the Legacy of the Force series. This novel gave us an element that’s been lacking in every Star Wars book in the timeline since the NJO began, with the exception of Denning’s Dark Nest series—a good lightsaber fight! I found the battles at the end deeply satisfying, although heartbreaking. The heartbreaking element of this series isn’t new though, and personally I think it is being handled well. Jacen’s fall has been understandable as the reader is given insight to his thought process. What I liked best about Sacrifice was the fact that it really, finally advanced the plot in significant ways. I’m very interested in how each and every character is going to respond to the events of this one. In a galaxy full of war, sacrifices have to be made, and Traviss captures that excellently.