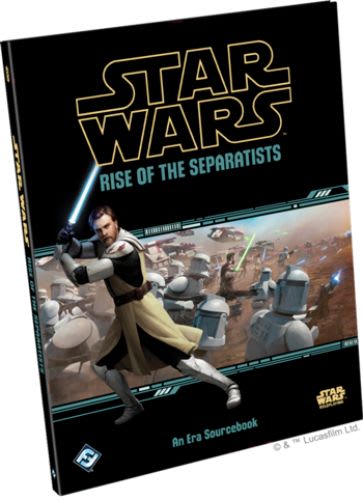 Rise of the Separatists

Rise of the Separatists is a era sourcebook for Fantasy Flight Games' Star Wars roleplaying game system, featuring brand-new source material compatible with each of Fantasy Flight Games' three Star Wars roleplaying lines. It is meant to be a spiritual prequel to Collapse of the Republic, with Collapse of the Republic covering the second half of the Clone Wars while Rise of the Separatists covers the first half. For generations, the Jedi Knights have been guardians of peace and justice in the Republic. But now they face a challenge like never before. With the Battle of Geonosis, the Clone Wars have begun. Battles rage across the galaxy as the Jedi and the Grand Army of the Republic fight back against the sinister agents and indefatigable droid armies of the Confederacy of Independent Systems. Meanwhile, the diplomats and representatives of the Galactic Senate work for peace and forge political alliances. Amid the chaos, looters, salvagers, and other fringers profit from the detritus of war, or simply try to survive. Fantasy Flight Games is proud to announce Rise of the Separatists, a new Era Sourcebook for the Star Wars Roleplaying Game! Rise of the Separatists explores the early days of the Clone Wars, and is fully compatible with every Star Wars Roleplaying Game Line including Edge of the Empire, Age of Rebellion, and Force and Destiny! Within this 144 page sourcebook, you'll find expanded player character options, new weapons, gear, and vehicles, profiles of famous Clone Wars era characters and GM guidance for running a campaign in this era, and more!