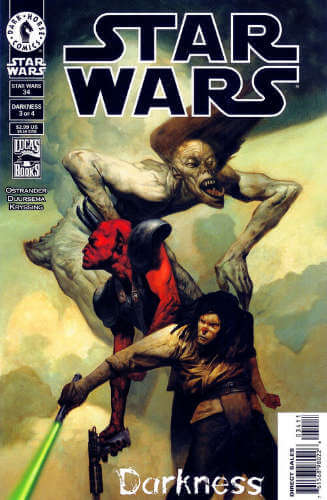 Darkness, Part 3 is the thirty-fourth issue in the Star Wars: Republic series of comics. It was published on September 26, 2001 by Dark Horse Comics. The vampiric, primal Anzati, under the leadership of Volfe Karkko, have overrun the prison planet of Kiffex. All lives on the planet are threatened as Karkko sends his followers out to collect beings to feed his hunger. Three Jedi Knights stranded on this planet make a stand against both a cantina full of enraged prisoners and a band of Anzati hunters led by Aayla, a former Padawan of Quinlan Vos. Quin, already struggling with the draw of the dark side, fights alongside Jedi Masters Tholme and Zao, and the ever-scheming Devaronian, Villie. After a surprising confrontation with Aayla, Quin and his companions are joined by another mysterious Jedi and find themselves victims of a conspiracy but are the last hope for hundreds of prisoners on Kiffex...and possibly the entire galaxy!